From Gay to Z: A Queer Compendium (Hardcover) 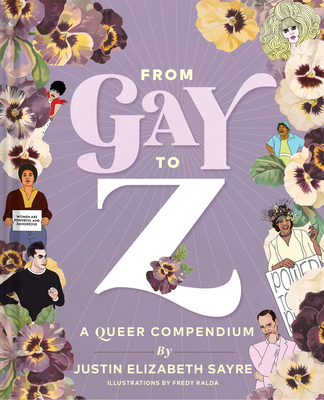 From Gay to Z: A Queer Compendium (Hardcover)


On Our Shelves Now at:
This illustrated compendium celebrates LGBTQIA+ history and culture, written by and according to culture icon Justin Elizabeth Sayre!

Based on Sayre's five-part show in New York City, From Gay to Z is a humorous collection of the rich legacy of gay culture, told through the letters of the alphabet. From ABBA to addiction, hair and makeup to HIV, Fannie Flagg to fierce, Sayre offers their own perspective on the things that have influenced gay culture today, including iconic figures, historical moments, ongoing issues in the LGBTQIA+ community, and everything in between. As gay culture is always evolving and different for everyone, this book does not serve as a definitive guide—instead, Sayre encourages readers to use this knowledge to reflect on the things that have informed their personal identities. Engagingly written and beautifully designed, From Gay to Z is a distinctive and dynamic look at gay culture for LGBTQIA+ readers everywhere.

STRONG VOICE AND ENGAGING CONTENT: Sayre's writing is lively, engaging, and rich. The entries have their own style and contain humorous anecdotes, facts, commentary, and more—all told through Sayre's animated yet authoritative voice.

BELOVED, WELL-KNOWN AUTHOR: Sayre is active and well-known in the LGBTQIA+ community and beyond. They've been recognized as one of "LA's 16 Most Talented LGBT Comics" by Frontiers Magazine, and their debut comedy album, The Gay Agenda, was named one of 2016's "Best Things in Comedy" by The Comedy Bureau. They host their own podcast, Sparkle & Circulate, where they interview performers, writers, and other creative minds of the LGBTQIA+ community. As an activist, Justin's charity benefit show, "Night of a Thousand Judys," raises money for the Ali Forney Center for Homeless LGBTQIA+ youth and is now in its 7th year.

• LGBTQIA+ people of all ages
• Fans of Trixie and Katya's Guide to Modern Womanhood
• Those looking for a birthday or holiday gift for their LGBTQIA+ friends and family
Justin Elizabeth Sayre is a playwright and performer who Michael Musto called, "Oscar Wilde meets Whoopi Goldberg." Sayre is a fixture of the Downtown Cabaret Scene in New York, first with their long-running monthly show, The Meeting of the International Order of Sodomites at Joe's Pub/The Public Theatre. Their show, The GAyBC's, a five-part series on which this book is based also ran at Joe's Pub. Sayre has written a series of YA Novels, Husky, Pretty, and Mean, released by Penguin Books. Sayre has also written for Television, working with Michael Patrick King on his Hit CBS comedy, 2 Broke Girls and most recently on Fox's The Cool Kids. Sayre also appeared on HBO's The Comeback with Lisa Kudrow. They live in a world of their own and have been blocked on Twitter by Meghan McCain.
"Their goal

throw a little shade and make a little joy," and the book is wildly successful on both counts...Exuberant line drawings by Fredy Ralda are scattered

throughout; the best of these juxtapose figures who share little other than an initial -Beyoncé

with Leonard Bernstein, or Dan Levy with Liberace."

“Sayre calls the book “a who’s who of LGBTQ+” and organizes hundreds of entries on contemporary and historical figures, as well as some inanimate touchstones of queer culture (poppers, leather, piano bars), alphabetically. Sayre’s canonization of their own “opinions” on which queers hold historical importance is exactly the kind of grassroots, chaotic fan fervor that energizes gay fame in the first place.”

"In this rowdy celebration of queer culture, comedian and playwright Sayre (Husky) “throw[s] a little shade and make[s] a little joy” with a delicious “who’s who of the LGBTQ+.” Offering cheeky illustrations alongside a brisk and breezy cultural history, the guide-which focuses on “artists and activists who are gay, or have a gay following”-entertains and educates in equal measure."

"Many readers will enjoy this breezy, wide-ranging, and at times opinionated look at LGBTQIA+ figures, trends, and influencers."

"From Gay to Z can hold its own, whether as a cultural primer for a baby queer or as a library resource. The perfect resource to dip in and out of, From Gay to Z’s entries are enlightening and entertaining."