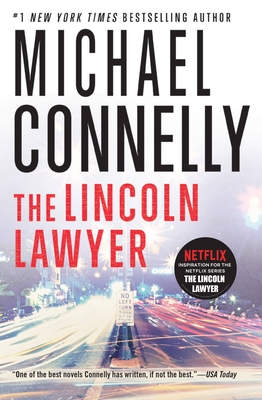 This is book number 1 in the A Lincoln Lawyer Novel series.

The bestselling legal thriller has charismatic defense attorney Mickey Haller taking on a slam-dunk court case involving a Beverly Hills playboy -- but as it spirals into a nightmare, he finds himself in a fight for his life.   Mickey Haller is a Lincoln Lawyer, a criminal defense attorney who operates out of the backseat of his Lincoln Town Car, traveling between the far-flung courthouses of Los Angeles to defend clients of every kind. Bikers, con artists, drunk drivers, drug dealers -- they're all on Mickey Haller's client list. For him, the law is rarely about guilt or innocence, it's about negotiation and manipulation. Sometimes it's even about justice.   A Beverly Hills playboy arrested for attacking a woman he picked up in a bar chooses Haller to defend him, and Mickey has his first high-paying client in years. It is a defense attorney's dream, what they call a franchise case. And as the evidence stacks up, Haller comes to believe this may be the easiest case of his career. Then someone close to him is murdered and Haller discovers that his search for innocence has brought him face-to-face with evil as pure as a flame. To escape without being burned, he must deploy every tactic, feint, and instinct in his arsenal -- this time to save his own life.
Michael Connelly is the author of thirty-one previous novels, including #1 New York Times bestsellers Two Kinds of Truth, The Late Show, and The Wrong Side of Goodbye. His books, which include the Harry Bosch series and the Lincoln Lawyer series, have sold more than seventy-four million copies worldwide. Connelly is a former newspaper reporter who has won numerous awards for his journalism and his novels and is the executive producer of Bosch, starring Titus Welliver. He spends his time in California and Florida.
Will fascinate...and dazzle.—People

[This] intricate, fast-moving tale barrels along...Beware picking up THE LINCOLN LAWYER. You won't want to put it down until you've navigated its rapids to the end.—Los Angeles Times

Connelly has stepped up to the plate in the overflowing ballpark of legal thrillers and blasted a grand slam his first time at bat.—Chicago Tribune

Hurtles into the realm of the legal thriller with excitingly renewed energy and a full bag of tricks. Entertaining as it is during the investigation phase, the book goes up a notch when the courtroom conniving takes over.—Janet Maslin, New York Times

One of the best novels Connelly has written, if not the best.—USA Today

All that Connelly readers have come to expect.—Denver Post