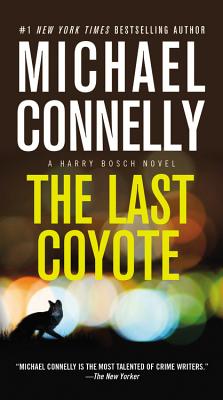 This is book number 4 in the A Harry Bosch Novel series.

Suspended from his job with the LAPD, Harry Bosch must face the darkest parts of his past to track down his mother's killer . . . even if it costs him his life.
Harry attacked his commanding officer and is suspended indefinitely, pending a psychiatric evaluation. At first he resists the LAPD shrink, but finally recognizes that something is troubling him and has for a long time. In 1961, when Harry was twelve, his mother, a prostitute, was brutally murdered, and no one has ever been accused of the crime.

With the spare time a suspension brings, Harry opens up the thirty-year-old file on the case and is irresistibly drawn into a past he has always avoided. It's clear that the case was fumbled and the smell of a cover-up is unmistakable. Someone powerful was able to divert justice and Harry vows to uncover the truth. As he relentlessly follows the broken pieces of the case, the stirred interest causes new murders and pushes Harry to the edge of his job... and his life.
Michael Connelly is the author of thirty-six previous novels, including #1 New York Times bestsellers The Dark Hours andThe Law of Innocence. His books, which include the Harry Bosch series, the Lincoln Lawyer series, and the Renée Ballard series, have sold more than eighty million copies worldwide. Connelly is a former newspaper reporter who has won numerous awards for his journalism and his novels. He is the executive producer of three television series: Bosch,Bosch: Legacy, and The Lincoln Lawyer. He spends his time in California and Florida.

"A powerful book that will further Connelly's growing reputation as a skillful and imaginative writer."Houston Chronicle

"Connelly remains a master...superior crime fiction, as suspenseful as it is psychologically acute."Booklist (starred review)

"Prose that cuts to the quick...a masterfully interwoven plot and gripping suspense."Library Journal