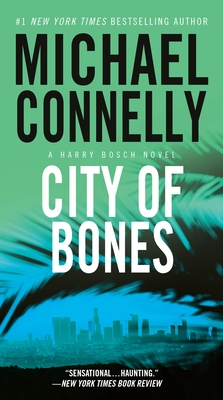 This is book number 8 in the A Harry Bosch Novel series.

When a dog unearths evidence of a murder in the Hollywood Hills, Detective Harry Bosch must tackle a cold case that sparks memories he's tried to forget.
It's a cold case, but for Detective Harry Bosch, it stirs up memories of his childhood as an orphan. He can't let it go. As the investigation takes Bosch deeper into the past, a beautiful rookie cop brings him alive in the present. No official warning can break them apart -- or prepare Bosch for the explosions when the case takes a few hard turns. Suddenly all of L.A. is in an uproar, and Bosch, fighting to keep control, is driven to the brink of an unimaginable decision.
Michael Connelly is the author of thirty-six previous novels, including #1 New York Times bestsellers The Dark Hours andThe Law of Innocence. His books, which include the Harry Bosch series, the Lincoln Lawyer series, and the Renée Ballard series, have sold more than eighty million copies worldwide. Connelly is a former newspaper reporter who has won numerous awards for his journalism and his novels. He is the executive producer of three television series: Bosch,Bosch: Legacy, and The Lincoln Lawyer. He spends his time in California and Florida.