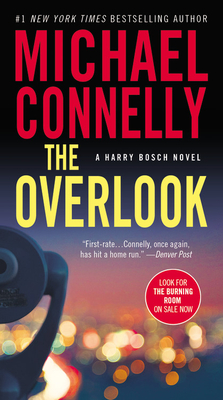 This is book number 13 in the A Harry Bosch Novel series.

In his first case with the Homicide Special Squad, LAPD Detective Harry Bosch must follow his instincts to stop a killer who could destroy the entire city -- even as the FBI works against him.
In his first case since he left the LAPD's Open Unsolved Unit for the prestigious Homicide Special squad, Harry Bosch is called out to investigate a murder that may have chilling consequences for national security. A doctor with access to a dangerous radioactive substance is found murdered in the trunk of his car. Retracing his steps, Harry learns that a large quantity of radioactive cesium was stolen shortly before the doctor's death. With the cesium in unknown hands, Harry fears the murder could be part of a terrorist plot to poison a major American city.

Soon, Bosch is in a race against time, not only against the culprits, but also against the Department of Homeland Security and the FBI (in the form of Harry's one-time lover Rachel Walling), who are convinced that this case is too important for the likes of the LAPD. It is Bosch's job to prove all of them wrong.
Michael Connelly is the author of thirty-six previous novels, including #1 New York Times bestsellers The Dark Hours andThe Law of Innocence. His books, which include the Harry Bosch series, the Lincoln Lawyer series, and the Renée Ballard series, have sold more than eighty million copies worldwide. Connelly is a former newspaper reporter who has won numerous awards for his journalism and his novels. He is the executive producer of three television series: Bosch,Bosch: Legacy, and The Lincoln Lawyer. He spends his time in California and Florida.