In Defense of Elitism: Why I'm Better Than You and You Are Better Than Someone Who Didn't Buy This Book (Paperback) 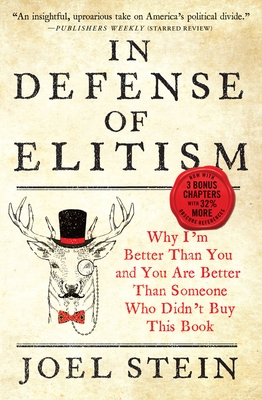 In Defense of Elitism: Why I'm Better Than You and You Are Better Than Someone Who Didn't Buy This Book (Paperback)


On Our Shelves Now at:
Experience a "brilliant exploration" (Walter Isaacson) of America's political culture war and a hilarious call to arms for the elite, with three chapters on foibles of the pandemic era.

"I can think of no one more suited to defend elitism than Stein, a funny man with hands as delicate as a baby full of soft-boiled eggs." —Jimmy Kimmel, host of Jimmy Kimmel Live!

The night Donald Trump won the presidency, our author Joel Stein, Thurber Prize finalist and former staff writer for Time Magazine, instantly knew why. The main reason wasn't economic anxiety or racism. It was that he was anti-elitist. Hillary Clinton represented Wall Street, academics, policy papers, Davos, international treaties and the people who think they're better than you. People like Joel Stein. Trump represented something far more appealing, which was beating up people like Joel Stein.

In a full-throated defense of academia, the mainstream press, medium-rare steak, and civility, Joel Stein fights against populism. He fears a new tribal elite is coming to replace him, one that will fend off expertise of all kinds and send the country hurtling backward to a time of wars, economic stagnation and the well-done steaks doused with ketchup that Trump eats.

To find out how this shift happened and what can be done, Stein spends a week in Roberts County, Texas, which had the highest percentage of Trump voters in the country. He goes to the home of Trump-loving Dilbert cartoonist Scott Adams; meets people who create fake news; and finds the new elitist organizations merging both right and left to fight the populists. All the while using the biggest words he knows.
Joel Stein grew up in Edison, N.J., and went to Stanford. From 1997-2017 he was a staff writer for Time magazine, writing a regular humor column and more than a dozen cover stories; he was also the back page columnist for Entertainment Weekly and the opinion section of The Los Angeles Times. He has contributed to Bloomberg Businessweek, GQ, Esquire, the New Yorker, Food & Wine, Travel + Leisure,The New York Times Book Review,Elle, andMen's Health.

Stein was a Ferris Professor of Journalism at Princeton and has appeared as a talking head on television shows such as Real Time with Bill Maher, Late Night with Conan O'Brien, and VH1's I Love The '80s. He's interviewed celebrities for HBO, Cinemax, and Comedy Central. In addition to writing on staff for two television shows, he created an animated show for VH1 (Hey Joel) and wrote six network pilots. His 2012 book, Man Made: A Stupid Quest For Masculinity, was a bestseller, and Fox hired him to adapt it as a film script. He's currently writing for the upcoming show American Princess produced by Jenji Kohan -- best known as the creator of Showtime comedy-drama series Weeds and Netflix series Orange is the New Black.
"With this indispensable book, Joel Stein firmly establishes himself as the Ted Nugent of elitism."—--Andy Borowitz, New York Times bestselling author and writer of The Borowitz Report

"Every paragraph of this book will make you laugh, but it will also (I promise) change the way you think. Joel has written a brilliant exploration of the supposed divide between elites and populists, cleverly disguised as a humorous personal excursion. Like Don Quixote he forays into perilous territory, his lance at his side, and what he finds will surprise you. Deeply reported and poignant, with a light touch of sweet self-awareness, his journey can help us all take our minds to a better place."—--Walter Isaacson, the New York Times bestselling author of Leonardo Da Vinci and Steve Jobs

"I can think of no one more suited to defend elitism than Stein, a funny man with hands as delicate as a baby full of soft-boiled eggs."—--Jimmy Kimmel, host of Jimmy Kimmel Live!

"[Stein] investigates the contemporary political landscape with a gimlet eye and
plenty of humor in this deep dive into our cultural divide."—Town and Country

"With his smart, self-deprecating humor, former Time columnist Stein investigates the correlation between the rise of populism and the delegitimization of expertise... In a world that seems so fragile, Stein makes a witty case for trained and trustworthy people running it."—The National BookReview

"Joel Stein is a condescending bastard, but he's also very funny, insightful and correct. This book is a crucial argument for the importance of expertise in this world that increasingly rejects it. As Stein points out, it may feel good to go with the gut or follow popular opinion, but it does have its downsides. Like, for instance, causing a planetary apocalypse."—--AJ Jacobs, the New York Times bestselling author of The Year of Living Biblically and The Know-It-All

"In these troubled times, we, as a nation, desperately need somebody to bring us together. Instead, we have Joel Stein, and this brilliantly funny book. So let's let somebody else unite us, while we let Joel Stein entertain the hell out of us."—--Dave Barry, Pulitzer Prize-winning columnist and bestselling author of Dave Barry Turns 40

"Joel Stein makes a case for elitism over populism, but, contra what you might expect based on the subtitle, he does so without being condescending, without being smug...One of the most nuanced and introspective takes on populism post-2016 election, with Stein's typical humorous, easy to read style making the subject matter all the more accessible."—Washington Free Beacon

"How can someone be so erudite and so funny at the same time? Read this book, be deeply offended by how much you laugh, then get yourself a chili dog to cleanse your intellectual palate. Then read it again. It's hilarious."
—Aisha Tyler, comedian, actress, and New York Times bestselling author

"As a white male Yale grad from New England who now lives in New York City and works in media, I feel like this book was written just for me. However, I will allow Joel Stein to publish other copies and sell you one because it really is that good!"
—John Hodgman, New York Times bestselling author