Getting Started with CNC: Personal Digital Fabrication with Shapeoko and Other Computer-Controlled Routers (Paperback) 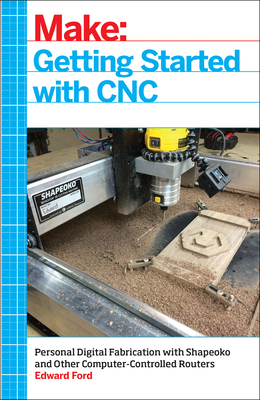 Getting Started with CNC: Personal Digital Fabrication with Shapeoko and Other Computer-Controlled Routers (Paperback)

Getting Started with CNC is the definitive introduction to working with affordable desktop and benchtop CNCs, written by the creator of the popular open hardware CNC, the Shapeoko. Accessible 3D printing introduced the masses to computer-controlled additive fabrication. But the flip side of that is subtractive fabrication: instead of adding material to create a shape like a 3D printer does, a CNC starts with a solid piece of material and takes away from it. Although inexpensive 3D printers can make great things with plastic, a CNC can carve highly durable pieces out of a block of aluminum, wood, and other materials. This book covers the fundamentals of designing for--and working with--affordable ($500-$3000) CNCs.

Edward Ford is a Maker. He was the kid that took his parents' TV apart to see how it worked, along with the toaster, fridge, and any other thing that he could wedge a screwdriver in to. He is a staunch advocate for open hardware, open source software, and making the world a better place by empowering people to create their own high-quality products. Edward wants everyone to be their own manufacturer. In 2011 Edward designed and released Project Shapeoko, an open hardware desktop CNC machine. The project is now in its second release and has found a home in thousands of Makers' shops all across the world. Outside of work, you can find Edward spending time (aka playing!) with his two young daughters or checking items off the never ending honey-do list his wife has assigned him.