The Corpse in the Waxworks: A Paris Mystery (British Library Crime Classics) (Paperback) 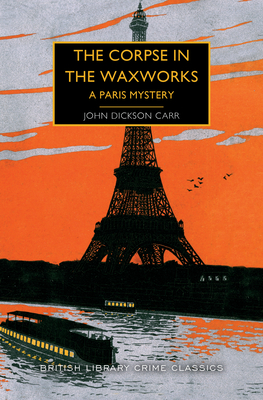 The Corpse in the Waxworks: A Paris Mystery (British Library Crime Classics) (Paperback)

"The purpose, the illusion, the spirit of a waxworks. It is an atmosphere of death. It is soundless and motionless… Do you see?"

Last night Mademoiselle Duchêne was seen heading into the Gallery of Horrors at the Musée Augustin waxworks, alive. Today she was found in the Seine, murdered. The museum's proprietor, long perturbed by the unnatural vitality of his figures, claims that he saw one of them following the victim into the dark—a lead that Henri Bencolin, head of the Paris police and expert of 'impossible' crimes, cannot possibly resist.

Surrounded by the eerie noises of the night, Bencolin prepares to enter the ill-fated waxworks, his associate Jeff Marle and the victim's fiancé in tow. Waiting within, beneath the glass-eyed gaze of a leering waxen satyr, is a gruesome discovery and the first clues of a twisted and ingenious mystery.

First published in 1932 at the height of crime fiction's Golden Age, this macabre and atmospheric dive into the murky underground of Parisian society presents an intelligent puzzle delivered at a stunning pace. This new edition also includes the rare Inspector Bencolin short story "The Murder in Number Four" by John Dickson Carr, and an Introduction by CWA Diamond Dagger-Award winning author Martin Edwards.

John Dickson Carr (November 30, 1906 - February 27, 1977) was a hugely popular and prolific author of crime fiction, regarded as one of the finest writers of ‘Golden Age’ mysteries. He was one of only two Americans ever admitted to the Detection Club, a prestigious honor amongst writers.

"The title says it all: juge d’instruction Henri Bencolin outdoes himself in this 1932 yarn, perhaps the most atmospheric of all Carr’s floridly atmospheric mysteries...If this slice of Grand Guignol doesn’t give you the yips, you’re probably yip-proof. Your loss." — Kirkus Reviews