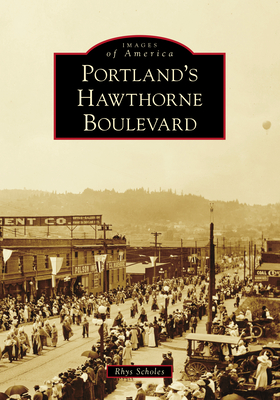 
Special Order—Subject to Availability
From a farm path in 1850 to a tourist destination in the 21st century, Hawthorne Boulevard on the east side of Portland has become a bustling city thoroughfare and a persistently eclectic neighborhood. The street that runs from the Willamette River to Mount Tabor has been called a hippie haven and a shopper's paradise. It takes its name from Dr. J.C. Hawthorne, who opened Oregon's first asylum there in 1861. Streetcars brought population growth, grocery stores, and saloons. In 1912, the delegates to the Elks' national convention paraded on Hawthorne Boulevard, and the 1948 Rose Festival Grand Floral Parade was there. In the 1950s, the Hawthorne Boosters kept the bustle in the boulevard, but the 1970s brought vacant storefronts. Cheap rent created opportunities for hip entrepreneurs, and organized revitalization in the 1980s was sensitive to the communities' unique character. Today, Hawthorne Boulevard draws visitors from across the city and around the world.