Hitting Against the Spin: How Cricket Really Works (Paperback) 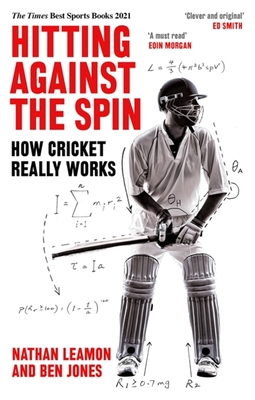 Hitting Against the Spin: How Cricket Really Works (Paperback)

'Fascinating and insightful . . . lifts the curtain to reveal the inner workings of international cricket. A must-read for any cricketer, coach or fan' Eoin Morgan

How valuable is winning the toss? And how should captains use it to their advantage? Why does a cricket ball swing? Why don't Indians bat left-handed? What is a good length and why? Why are leg-spinners so successful in T20 cricket? Why did England win the World Cup? Why do all Test bowlers bowl at either 55 or 85mph? Why don't they pitch it up?

All cricketers long to know the answer to these questions and many more. Only fifteen years ago it would have been difficult to answer them - cricket was guided only by decades-old tradition and received wisdom.

Data has changed everything. Today we can track every ball to within millimetres; its release point, speed and bounce point are measured as are how much the ball swings, how much it deviates off the pitch, the exact height and line that it passes the stumps, and multiple other variables. Hitting Against the Spin is the story of that data, and what it can tell us about how cricket really works.

Leading cricket thinkers Nathan Leamon and Ben Jones lift the lid on international cricket and explain its hidden workings and dynamics - the forces that shape cricket and, in turn, the cricketers who play it. They analyse the unseen hands that determine which players succeed and which fail, which tactics work and which don't, which teams win and which lose. They also explore the new world of franchise cricket as well as the rapid evolution of the T20 format.

Revolutionary in its insights, Hitting Against the Spin takes you on a fascinating whistle-stop tour of modern cricket and sports analytics, bringing cricket firmly into the twenty-first century by revealing its long-kept secrets. This is the most important cricket book in decades.

Nathan Leamon has a decade of experience working in elite sport. He is currently the Lead Analyst with the England One-Day and T20 teams, and Strategy Consultant for the Kolkata Knight Riders. His first book The Test was long-listed for the William Hill Sports Book of the Year. When not on the road he lives in Berkshire with his wife and two daughters.

Ben Jones is an analyst at CricViz, the world's leading cricket analytics provider. He read English Literature at Cambridge and now lives in Oxford. He has written for, amongst others, Wisden Cricket Monthly, Hindustan Times and DailyTelegraph.

"He held degrees in both English and Economics, and the ability to to articulate the world of one, with the words of the other." The writer here is Nathan Leamon and the subject is baseball pioneer Bill James. But Leamon (both a novelist and a data analyst) could just as easily be writing about himself. Leamon has a rare kind of high intelligence: he is open to all kinds of knowledge, not just scientific knowledge, and he understands which method is appropriate in which circumstance. Put differently, he is not only clever and original, but also wise—Ed Smith, National Selector for England cricket & author of What Sport Tells Us About Life

Fascinating and insightful . . . lifts the curtain to reveal the inner workings of international cricket. A must-read for any cricketer, coach or fan—Eoin Morgan

Sport has been revolutionized by data. In their path-breaking book, Nathan Leamon and Ben Jones use data to show that many of our preconceptions are false and reveal astonishing new insights into international cricket. Compulsory reading for fans, commentators, captains and players—Mervyn King

Deeply thoughtful, clever and open-minded . . . One way of viewing this book is as cricket's A Brief History of Time, a layman's guide to deep complexity, an act of communication as much as one of science. On that level it works beautifully
well, engaging with concepts in attention-grabbing ways