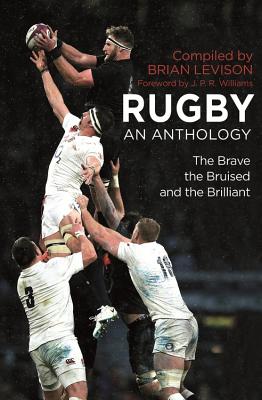 Inspiring and irreverent by turns, Brian Levison's new anthology has drawn on rugby's wealth of excellent writing. Frank Keating, P. G. Wodehouse, Alec Waugh, A. A. Thomson, John Reason and Mick Imlah are among the distinguished names who have written movingly, amusingly and entertainingly about the game they loved.

Great players such as Brian O'Driscoll, Willie John McBride, J. P. R. Williams, Chester Williams, Colin Meads, Gavin Hastings and Brian Moore give us a fascinating insider's view, as does World Cup Final referee Derek Bevan, who reveals what it is like to try to control thirty powerful and often volatile men in a highly competitive situation. But some of the best writing and the wittiest insights come from those who played their rugby at a much less exalted level.

The origins of the game - sometimes true, sometimes fanciful - are explored as are some of its rituals like the haka. There are amusing tales including that of the four Tibetan boys sent by the Dalai Lama to learn the game at Rugby School and an account of New Zealand scrum-half Chris Laidlaw's hostile reception at a village fête in Wales. Along with barely believable stories about the game's hardest men, including the French coach Jean 'le Sultan' Sébédio, who used to conduct training sessions wearing a sombrero and wielding a long whip, and 'Red' Conway who had his finger amputated rather than miss a game for South Africa.

One section 'Double Vision' looks at the same incident from opposing viewpoints, such as when the then relatively inexperienced Irish immortal Willie John McBride took a swing at the mighty All Black Colin Meads in a line-out. Another, 'Giving it Everything', shows how exceptional courage was not restricted to the rugby field but extended to the battle grounds of the First World War.

From the compiler of highly acclaimed All in a Day's Cricket, this selection covers the game from virtually every angle and is sure to delight any rugby fan.

BRIAN LEVISON has published three collections of poetry and, with Frances Farrar, a compilation of musical anecdotes, Classical Music's Strangest Concerts and Characters. His poems have been published in The Cricketer and broadcast by the BBC. His Remarkable Cricket Grounds has been shortlisted for the Cross Sports Book of the Year in the illustrated book category.
A super collection of rugby writing compiled by Brian Levison. One of my favourites from the book and newspaper extracts is Willie John McBride's account of how Moss Keane got more than he bargained for when he tried to steal a frankfurter from a Paris café—Rugby World