Battleships Yamato and Musashi (Anatomy of The Ship) (Hardcover) 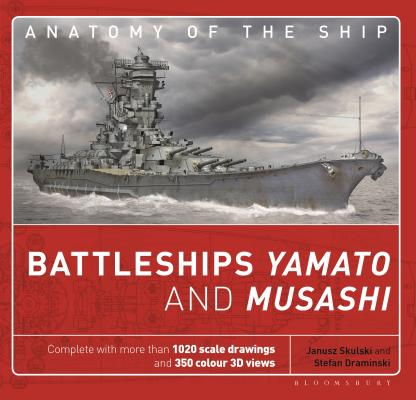 Battleships Yamato and Musashi (Anatomy of The Ship) (Hardcover)

Equipped with the largest guns and heaviest armour and with the greatest displacement of any ship ever built, the Yamato proved to be a formidable opponent to the US Pacific Fleet in the Second World War. The book contains a full description of the design and construction of the battleship including wartime modifications, and a career history followed by a substantial pictorial section with rare onboard views of Yamato and her sister ship Musashi, a comprehensive portfolio of more than 1,020 perspective line artworks, 350 colour 3D views, and 30 photographs. The wreck of Musashi has been recently discovered to great excitement in Japan, renewing interest in these iconic warships.

Janusz Skulski's anatomies of three renowned ships of the 20th century Japanese navy are among the most comprehensive of the Anatomy series with hundreds of meticulously researched drawings of the ships. Since their first publication he has continued to research the ships and has now produce a more definitive anatomy than was possible then. He has teamed up with 3D artist Stefan Draminksi who produces superb realistic renditions of the ships that bring a whole new level of detail to the portraits of the ships. This new editions is a genuine 'Super Anatomy' containing the most detailed renditions of these ships ever seen.

Janusz Skulski is a draftsman and modeller with a passion for accuracy. The first editions of the books are highly rated by readers for the excellence of their drawings. He lives in Poland.

Stefan Draminski has developed a technique for creating breathtakingly realistic 3D models of ships which can be taken apart to create almost infinite details of the ships. He lives in Poland.