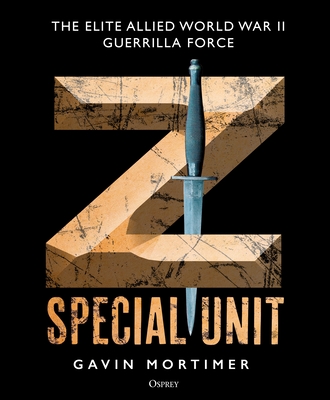 Based on recently released wartime files, interviews with surviving veterans and previously unpublished private papers, this is the incredible story of the origins and operations of a wartime special forces unit that defied the odds.

Z Special Unit, one of the most intrepid but arguably the most unsung of Allied Special Forces of the Second World War waged a guerrilla war against Japan for two years in the south-west Pacific. On some of their 81 operations Z Special Unit slipped into enemy harbors in canoes and silently mined ships before vanishing into the night; on others they parachuted into the dense Borneo jungle to fight with headhunters against the Japanese and on one occasion they landed on an Indonesian island and smuggled out the pro-Allied sultan from under Japanese noses.

The Japanese weren't the only adversary that Z Special Unit encountered in the brutal terrain of the Pacific. In the mango swamps of Borneo and the dense jungle of Papua New Guinea they were faced with venomous snakes, man-eating crocodiles, and deadly diseases. But it was the enemy soldiers who proved the most ruthless foe, beheading those Z Special Unit commandos who fell into their hands.

“Z was a different operation to anything else,” recalls veteran Jack Tredrea. “You were never told what you were going to do. You weren't allowed to talk about what you were training for in case any of us were caught. You could have been tortured and divulged information."

Drawing on veteran interviews as well as operational reports and recently declassified SOE files, Gavin Mortimer explores the incredible history of this remarkable special forces unit and the band of commandoes that defied the odds.

Gavin Mortimer has written numerous books on Special Forces, including the ground-breaking Stirling's Men. An award-winning writer whose books have been published on both sides of the Atlantic, Gavin has written for a wide range of publications, from BBC History to the American Military History Quarterly. He was the historical consultant on the 2017 BBC documentary about the SAS and has conducted World War II battlefield tours with serving members of the Regiment. Gavin is based in the UK.
“With superb production standards and lots of interesting photos, this is an intriguing look at the chaotic world of spec ops down under.” —The Armourer