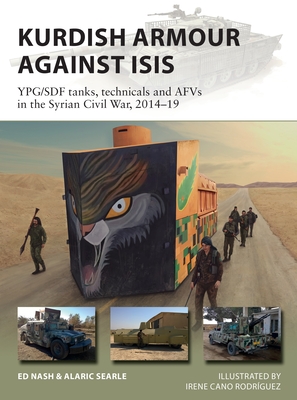 The US-backed Kurdish YPG/SDF fought on the front line of the war against Islamic State for five years. This study reveals how they developed their own armored force using captured tanks, homebuilt armor and "technicals" and the role they played in the defeat of "Daesh".

The emergence of the armored force of the YPG (People's Protection Units), later renamed the Syrian Democratic Forces during the Syrian Civil War is one of the major developments of this conflict. The YPG/SDF employed a range of vehicles against "Daesh" during 2014-19 and this study identifies, as far as possible which vehicles took part in major battles, such as Kobane, Manbij and Raqqa. While the YPG was frequently outgunned by the so-called Islamic State (ISIS), it was able to rely on United States air support after 2015. Nonetheless, AFVs formed part of the fighting units and were important in both the fighting and propaganda war.

The title covers the original sources of Kurdish tanks and other armored vehicles: the T-55 tanks which the YPG employed were of Syrian Army origin, left behind in the early chaotic days of the civil war; other AFVs were captured from ISIS, and often of US Army origin, lost by the Iraqi Army following the fall of Mosul in 2014; others were constructed by the YPG themselves in workshops. These home-made tanks or infantry transporters were constructed from a variety of vehicles, including rubbish disposal lorries, diggers and other agricultural vehicles. While the tanks and homemade armor attracted Western media attention, the most useful fighting vehicles were the Kurds' technicals, or dushkas (pick-up trucks mounted with heavy-calibre weapons), fast vehicles used for fire support on a large scale.

Ed Nash fought for the YPG in 2015/16, participating in several offensives against the so-called Islamic State. He has written an account of his experiences in a memoir entitled Desert Sniper: How One Ordinary Brit Went to War Against ISIS (Little, Brown, 2018). He has travelled in conflict zones across the globe, especially in South East Asia. He holds a first-class degree in History and has published many articles on counterinsurgency, weapons technology and military affairs more generally.

Alaric Searle is Professor of Modern European History, University of Salford, UK. He is the author of numerous journal articles and several books on military history, including Armoured Warfare: A Military, Political and Global History (Bloomsbury Academic, 2017), and is editor of an essay collection, Genesis, Employment, Aftermath: First World War Tanks and the New Warfare (Helion, 2015). He is also a Fellow of the Royal Historical Society and a visiting professor at Nankai University, Tianjin, China.

Irene Cano Rodríguez (known as Araire) is a freelance artist working and living in Spain. Since 2014, she has worked as a specialized historical illustrator, recreating historical scenes for museums, studios, editorials and magazines. Nowadays she also combines her work as an illustrator with teaching archaeological illustration.