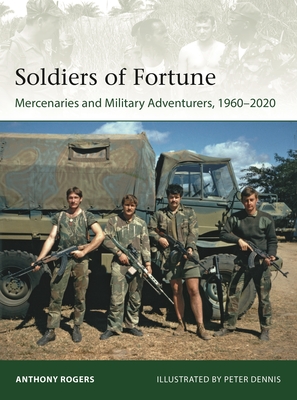 This highly illustrated title traces the development of mercenary soldiering, from individuals and small units in the African wars of the 1960s-90s to today's state-employed corporate military contractors.

The phenomenon of mercenary soldiering has constantly recurred in the news since the 1960s and has always attracted lively interest. The concept of "mercenaries" began in the former Belgian Congo during the 1960s when men such as Mike Hoare and Bob Denard assembled hundreds of military veterans to 'do the fighting' for a particular leader or faction. This idea soon evolved into small teams of individuals training and leading local forces with varying success; wars in Rhodesia and on South Africa's borders attracted foreign volunteers into national armed forces, and veterans of these conflicts later sought employment elsewhere as mercenaries. The wars in former Yugoslavia also attracted foreign fighters inspired as much by political and religious motives as by pay. This picture then evolved again, as former officers with recent experience set up sophisticated commercial companies to identify and fill the needs of governments whose own militaries were inadequate.

Most recently, the aftermath of wars in Iraq and Afghanistan has seen such contractors taking on some of the burden of long-term security off major national armies, while the subsequent rise of ISIS/Daesh has added a parallel strain of ideological volunteers. The author is well placed to describe how the face of mercenary soldiering has evolved and changed over 60 years. Using first-hand accounts, photos and detailed illustrations, this book presents a compelling snapshot of the life, campaigns and kit used by mercenary operatives engaged in fighting within both larger and more specific conflicts around the world.

Anthony Rogers has enjoyed a varied career, including nearly 20 years in the private security sector. He is the author of two books about mercenaries and other aspects of unorthodox soldiering. A keen military historian, he has also written several books detailing events in and around the Mediterranean during World War II.