Carrhae 53 BC: Rome's Disaster in the Desert (Campaign) (Paperback) 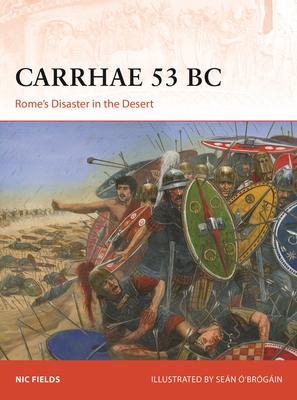 Carrhae 53 BC: Rome's Disaster in the Desert (Campaign) (Paperback)

Explores the critical battle of Carrhae, a fascinating tale of treachery, tactics, and topography in which Rome experienced one of its most humiliating defeats.

The Battle of Carrhae is from a heady moment in Roman history – that of the clever carve-up of power between the 'First Triumvirate' of Caius Iulius Caesar, Cnaeus Pompeius Magnus and Marcus Licinius Crassus (the Roman general who had famously put down the Spartacan revolt). It is a fascinating tale of treachery, tactics, and topography in which Rome experienced one of its most humiliating defeats at the hands of the Parthians, not far from a trade-route town hunkered down on the fringes of the arid wastes of northern Mesopotamia, sending shock waves through the Roman power structure.

Join classical historian Dr Nic Fields as he draws out the crucial psychological and political factors (including Crassus' lust for military glory and popular acclaim) that played a key role in this brutal battle. Relive in full detail how, despite being heavily outnumbered, the Parthian general Surena's horsemen completely outmanoeuvered Crassus' legionaries, killing or capturing most of the Roman soldiers. Explore the tactics and techniques of the Parthian horse archers, uncover details of Roman and Parthian equipment and weaponry, and experience the last stand of Publius Crassus, son of Marcus Licinius.

Dr Nic Fields started his career as a biochemist before joining the Royal Marines. Having left the military, he went back to university and completed a BA and PhD in Ancient History at the University of Newcastle. He was Assistant Director at the British School in Athens, Greece, and then a lecturer in Ancient History at the University of Edinburgh. Nic is now a freelance author and researcher based in south-west France.

Seán Ó'Brógáin lives and works in Donegal, Ireland. He has a BA (Hons) in Scientific and Natural History illustration from Lancaster University, and has worked for a wide range of clients. In addition to his stunning work for Osprey Publishing, he has collaborated with the University of Manchester, An Post, the National Museum of Ireland, the Irish Office of Public Works and a variety of media companies, museums, councils and private individuals.
"The author has produced a thoroughly researched profile of this humiliating defeat of one of the Triumvirate and the loss of most of a Roman army. He combines a knowledge of the classical sources (as usual, few in number and reliability) with a grasp of the military issues at both strategic and tactical level." -Miniature Wargames, Chris Jarvis