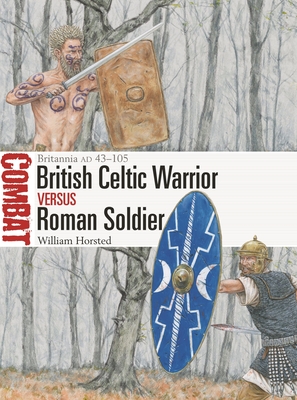 An illustrated study of the British tribal warriors and Roman auxiliaries who fought in three epic battles for control of Britain in the 1st century AD.

Following the Roman invasion of Britain in AD 43, the tribes of the west and north resisted the establishment of a 'Roman peace', led in particular by the chieftain Caratacus. Even in the south-east, resentment of Roman occupation remained, exploding into the revolt of Boudicca's Iceni in AD 60. Roman auxiliaries from two particular peoples are known to have taken part in the invasion of Britain: the Tungrians, from what is now Belgium, and the Batavians, from the delta of the River Rhine in the modern Netherlands. From the late 80s AD, units of both the Batavians and the Tungrians were garrisoned at a fort at Vindolanda in northern Britain. The so called 'Vindolanda tablets' provide an unparalleled body of material with which to reconstruct the lives of these auxiliary soldiers in Britain.

Featuring full-colour maps and specially commissioned battlescene and figure artwork plates, this book examines how both the British warriors and the Roman auxiliaries experienced the decades of conflict that followed the invasion. Their recruitment, training, leadership, motivation, culture and beliefs are compared alongside an assessment of three particular battles: the final defeat of Caratacus in the hills of Wales in AD 50; the Roman assault on the island of Mona (Anglesey) in AD 60; and the battle of Mons Graupius in Scotland in AD 83.

William Horsted studied Ancient History at the University of Bristol. As well as ancient Mediterranean warfare, his research interests include the religion, agriculture and ecology of the same period.

Adam Hook studied graphic design, and began his work as an illustrator in 1983. He specializes in detailed historical reconstructions, and has illustrated Osprey titles on subjects as diverse as the Aztecs, the Ancient Greeks, Roman battle tactics, 19th-century American subjects, the modern Chinese Army, and the history of fortification. His work features in exhibitions and publications throughout the world.

“Informative and plenty of detail throughout.” —The Armourer Magazine

"This is a great book for anyone thinking of recreating the Roman Conquest of Briton. This will provide a great deal of background information, and a great place to start any research for ideas and info." - Jason Hubbard, Irregular Magazine