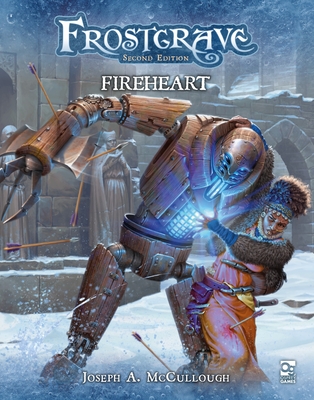 By Joseph A. McCullough, RU-MOR (Illustrator)

This supplement for Frostgrave provides players with new tools to build, animate, field, and face constructs in their games.

In the glory days of Ancient Felstad, artisans competed to produce the most beautiful, the most functional, and the most enduring constructs. These living works of art could be seen everywhere in the city, fulfilling many of the day-to-day tasks that kept the magical metropolis running. They provided transportation and security, worked on construction and cleaning, exterminated vermin, butchered animals, and tended furnaces. Then came the cataclysm. The ice and snow not only buried and destroyed most of the constructs active in the city, but nearly wiped out the knowledge of their creation. Certainly, the constructs animated by the explorers of the Frozen City are crude in both form and function compared to what once existed.

This supplement for Frostgrave: Fantasy Wargames in the Frozen City provides a study of constructs, offering expanded rules for their creation, modification, and even re-animation. It examines enchanters' workshops, detailing new magic items and base modifications that aid in the animation process, and also includes a bestiary full of new constructs. Of course, much of the knowledge that was once lost still exists in the frozen ruins, so the book also features several scenarios set in the once-great factories where the art of construct creation reached its pinnacle.

Joseph A. McCullough's first brush with writing for games was as co-author of The Grey Mountains supplement for the Middle-Earth Role-Playing Game, and he has remained passionate about Fantasy gaming since, going on to become an award-winning game designer. He is the creator of the “Frostgrave Family” of skirmish wargames (the Fantasy titles Frostgrave, Ghost Archipelago, Rangers of Shadow Deep, and the Sci-Fi evolution, Stargrave) and of the Oathmark Fantasy battle game and The Silver Bayonet, a game of Napoleonic Gothic Horror. The latest information on his game design and other writing can be found at: josephamccullough.com.

ªRU-MOR was born in Tarragona, Spain, and studied Fine Arts at the University of Seville, specialising in artwork restoration, before moving onto a professional career in sculpting miniatures. As a freelancer illustrator, her artwork has appeared in French museum exhibitions, Spanish RPGs and card games (such as Adventures in the East Mark, Walküre, and Epica: Dark Ages), and historical magazines, including Medieval Warfare and Desperta Ferro's Archaeology and History series, for which she also provides cover art. She has also worked with Osprey Games on a range of titles, including the Dracula's America and Frostgrave series.