Whatever Happened to Tradition?: History, Belonging and the Future of the West (Hardcover) 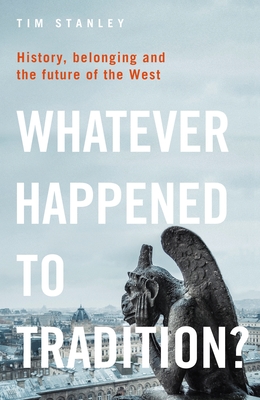 Whatever Happened to Tradition?: History, Belonging and the Future of the West (Hardcover)

The West feels lost. Brexit, Trump, the coronavirus: we hurtle from one crisis to another, lacking definition, terrified that our best days are behind us. The central argument of this book is that we can only face the future with hope if we have a proper sense of tradition – political, social and religious. We ignore our past at our peril. The problem, argues Tim Stanley, is that the Western tradition is anti-tradition, that we have a habit of discarding old ways and old knowledge, leaving us uncertain how to act or, even, of who we really are.

In this wide-ranging book, we see how tradition can be both beautiful and useful, from the deserts of Australia to the court of nineteenth-century Japan. Some of the concepts defended here are highly controversial in the modern West: authority, nostalgia, rejection of self and the hunt for spiritual transcendence. We'll even meet a tribe who dress up their dead relatives and invite them to tea.

Stanley illustrates how apparently eccentric yet universal principles can nurture the individual from birth to death, plugging them into the wider community, and creating a bond between generations. He also demonstrates that tradition, far from being pretentious or rigid, survives through clever adaptation, that it can be surprisingly egalitarian.

The good news, he argues, is that it can also be rebuilt. It's been done before. The process is fraught with danger, but the ultimate prize of rediscovering tradition is self-knowledge and freedom.

Tim Stanley is a historian and journalist. He graduated from Trinity College, Cambridge with a PhD in 2007, is the author of three books on American history and has taught at the University of Sussex and Royal Holloway, University of London. He started writing for the Daily Telegraph in 2011 and is now a parliamentary sketch writer, leader writer and columnist. He often appears as a commentator on TV and radio, including on The Moral Maze. He lives in Kent with a Cavalier King Charles Spaniel called Bertie.

“This is a rich and reflective book, based on wide reading and personal experience.” —Literary Review

“Whatever Happened to Tradition? is stuffed with marvellous vignettes… the reader is left feeling grateful for the abundance of knowledge and the ebullient conviction with which it is shared.” —Allison Pearson, Telegraph

“The writer he most resembles is Roger Scruton… Since Scruton died last year, there is a vacancy for a political philosopher who will defend the traditions of this nation with all his heart and all his considerable brain. I suspect we may have found his successor.” —Allison Pearson, Telegraph

“This book is brilliant. It's really radical in a way that all the other stuff that says it's radical is not. It really gives you an idea that there is something else outside this airless bubble of the self we are stuck in today. I find that kind of inspiring.” —Adam Curtis, filmmaker

“He persuasively presents tradition as rooting us in the world and in society, and as subtly adaptable.” —Jane O'Grady, the Daily Telegraph

“Roger Scruton's death deprived public discourse of its most intelligent and cogent defender of tradition, but Tim Stanley's Whatever Happened to Tradition? steps bravely into the breach.” —Church Times

"Tim Stanley suggests in his engaging way that fidelity to the past determines future happiness — for our civilisation, not just our souls." - Christopher Howse, The Spectator