Pushing the Boundaries: Cricket in the Eighties: Playing home and away (Hardcover) 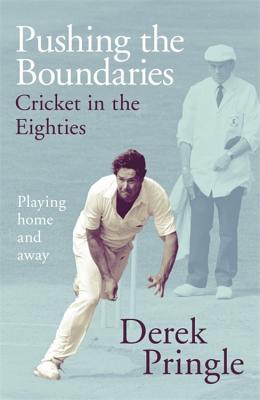 Pushing the Boundaries: Cricket in the Eighties: Playing home and away (Hardcover)

'Pringle's tale is both a love letter to the greatest player of his generation, Sir Ian Botham and an engaging romp in which cricket only plays a walk-on part.' Michael Atherton

The Eighties was a colourful period in English cricket. As a member of the most successful team in Essex's history and an England side capable of extraordinary highs and lows, Derek Pringle was lucky enough to be in the thick of it. Now, with the perspective of more than twenty years as a journalist, he lays bare the realities of life as a professional cricketer in a decade when the game was dominated by a cast of unforgettable characters, whose exploits became front-page news.

Picked for the Test side while still an ear stud-wearing student at Cambridge, he was as surprised as anybody to find himself playing alongside the likes of David Gower, Allan Lamb and Phil Edmonds. He also had to contend with being hailed as the new Ian Botham, even though the old one was still going strong - and playing in the same team.

For England, it was a time of mixed fortunes, as Ashes victories alternated with humiliation by a dominant West Indies. The chop-and-change policy of the selectors - culminating in the summer of four captains in 1988 - made cricket such an insecure profession that some players chose to go on rebel tours of South Africa, while others relished every opportunity the game provided - on and off the field.

The hard slog of domestic cricket, meanwhile, had never seen so much talent, with counties boasting overseas players like Viv Richards, Malcolm Marshall and Javed Miandad. A coach-free zone, it was left in the hands of canny old pros such as Keith Fletcher and John Lever, who guided Essex to multiple Championship and one-day successes.

But cricket was changing, and not necessarily for the better. By the end of the decade, as the new coaching culture established itself, it became clear that the days of the maverick cricketer were numbered. Few players ended the Eighties wealthy, but as Derek Pringle's eye-opening memoir reveals, all left rich in experience, with enough stories to last a lifetime.

Derek Pringle was born and raised in Nairobi, Kenya, where he first learnt to play cricket on matting pitches. He attended St Mary's School, Nairobi, then Felsted School in Essex, before reading Geography and Land Economy at Cambridge, where he captained the university at cricket and won three blues.

While still an undergraduate he was selected to play Test cricket for England in 1982, a feat achieved previously by Ted Dexter, 24 years earlier. He also appeared, briefly, in the Oscar-winning film Chariots of Fire, as Cambridge's vice-captain of athletics.

He played 30 Tests and 44 one-day internationals for England, appearing in two World Cups, one as a losing finalist in 1992. His cricket career at Essex, which spanned 15 years, included five County Championship titles, three John Player League titles, a NatWest Trophy and countless friendships. He retired from the game in 1993.

A second career, as a journalist, saw him appointed cricket correspondent for the Independent, then the Daily Telegraph, a role he fulfilled until 2014. He now works as a freelance writer.

His hobbies include photography and collecting vinyl records, of which he has several thousand - the latter perhaps explaining why he has never married. He has a son whose musical tastes he is trying to shape.

He lives in Cambridge.

Pringle's tale is both a love letter to the greatest player of his generation, Sir Ian Botham and an engaging romp in which cricket only plays a walk-on part. That despite the author's playing record that included 30 Tests, 44 ODIs, six County Championships with Essex and a World Cup final, a CV that most would be proud to take to the grave.—Michael Atherton, The Times

A fascinating and hilarious read. Like Chris Lewis, Andrew Flintoff, Ben Stokes and many more [Pringle] was originally hailed as the new Botham, before winding up as a very junior version. In his storytelling though, he might just have the edge on the great man.—Daily Telegraph

Anecdotes are funny, original and astounding, often all three...He [Pringle] has delivered with interest on his promise to avoid a bog-standard, self-serving work; if he pushed boundaries in his career he has flattened them completely with this honest addition to cricket literature.—The Cricketer

As Pringle spent the decade as [Ian] Botham's understudy ... it makes for a fascinating and hilarious read.—Daily Telegraph

Former England Test bowler's eye-popping and hilarious account of cricket in the 80s is as doused as a sherry trifle.—Guardian

A feast of anecdotes—The Observer