Poems from the Edge of Extinction: The Beautiful New Treasury of Poetry in Endangered Languages, in Association with the National Poetry Library (Paperback) 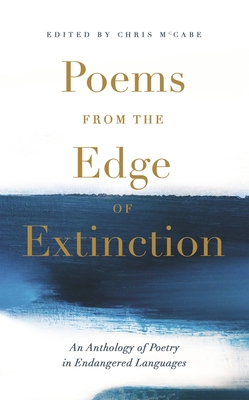 Poems from the Edge of Extinction: The Beautiful New Treasury of Poetry in Endangered Languages, in Association with the National Poetry Library (Paperback)


On Our Shelves Now at:
Gold winner in Poetry and Special Honors Award winner for Best Anthology Nautilus Book Awards
The Beautiful New Treasury of Poetry in Endangered Languages, in Association with the National Poetry Library Featuring award-winning poets from cultures as diverse as the Ainu people of Japan to the Zoque of Mexico, with languages that range from the indigenous Ahtna of Alaska to the Shetlandic dialect of Scots, this evocative collection gathers together 50 of the finest poems in endangered, or vulnerable, languages from across the continents.
With poems by influential, award-winning poets such as US poet laureate Joy Harjo, Hawad, Valzhyna Mort, and Jackie Kay, this collection offers a unique insight into both languages and poetry, taking the reader on an emotional, life-affirming journey into the cultures of these beautiful languages, celebrating our linguistic diversity and highlighting our commonalities and the fundamental role verbal art plays in human life.

Each poem appears in its original form, alongside an English translation, and is accompanied by a commentary about the language, the poet and the poem - in a vibrant celebration of life, diversity, language, and the enduring power of poetry.

One language is falling silent every two weeks. Half of the 7,000 languages spoken in the world today will be lost by the end of this century. With the loss of these languages, we also lose the unique poetic traditions of their speakers and writers.

This timely anthology is passionately edited by widely published poet and UK National Poetry Librarian, Chris McCabe, who is also the founder of the Endangered Poetry Project, a major project launched by London's Southbank Centre to collect poetry written in the world's disappearing languages, and introduced by Dr Mandana Seyfeddinipur, Director of the Endangered Languages Documentation Programme and the Endangered Languages Archive at SOAS University of London, and Dr Martin Orwin, Senior Lecturer in Somali and Amharic, SOAS University of London.

Chris McCabe's poetry collections are The Hutton Inquiry, Zeppelins,THE RESTRUCTURE (all Salt Publishing) and, most recently,Speculatrix (Penned in the Margins). He has recorded a CD with the Poetry Archive was shortlisted for The Ted Hughes Award in 2013 for his collaborative book with Maria Vlotides,Pharmapoetica. His plays Shad Thames, Broken Wharf and Mudflats, which won a Northern Arts Award,have been performed in London and Liverpool. He has read his work at venues including Southbank Centre, the British Library, the BFI, the Whitechapel Gallery and the Wellcome as well as performing at festivals such as Latitude and Ledbury.