Tales and Tombstones of Sunset Cemetery: Tracing Lives and Memorial Customs in a Southern Graveyard (Paperback) 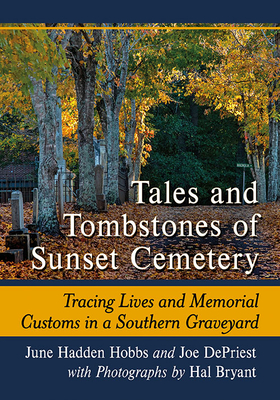 Tales and Tombstones of Sunset Cemetery: Tracing Lives and Memorial Customs in a Southern Graveyard (Paperback)

This book relates the stories and describes the memorials of the people buried in Shelby, North Carolina's historic Sunset Cemetery, a microcosm of the Southeastern United States. The authors, an academic and a journalist, detail the lives and memories of people who are buried here, from Civil War soldiers to those who created the Jim Crow South and promoted the narrative of the Lost Cause. Featured are authors W.J. Cash and Thomas Dixon, whose racist novel was the basis for The Birth of a Nation. Drawn from historical research and local memory, it includes the tales of musicians Don Gibson and Bobby Pepper Head London, as well as a paratrooper who died in the Battle of the Bulge and other ordinary folks who rest in the cemetery. A bigger responsibility is to give a voice to the silenced, enslaved people of color buried in unmarked graves. Cemeteries are sacred places where artistry and memory meet--to understand, we need both the tales and the tombstones.

June Hadden Hobbs is a professor of English and director of Undergraduate Research at Gardner-Webb University in Boiling Springs, North Carolina. She is the author of many articles on tombstones and American women's hymns and the former editor of Markers, the international journal of the Association for Gravestones Studies. In 2017 she received the Harriette Merrifield Forbes Award for outstanding contributions to the field of gravestone studies, the highest honor a gravestone scholar can receive. Joe DePriest, has had a 50-year newspaper career, including work as a reporter for the Shelby Star, the Charlotte Observer, and other local newspapers. His North Carolina Newspaper Association Awards include one for an account of his 1994 return to Vietnam, where he served a tour of duty as an Army journalist. He lives in Cramerton, North Carolina. Hal Bryant is a retired college art and photography instructor. He lives in Shelby, North Carolina.