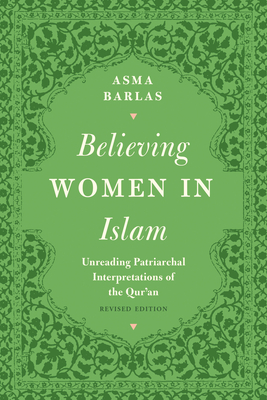 Does Islam call for the oppression of women? Non-Muslims point to the subjugation of women that occurs in many Muslim countries, especially those that claim to be "Islamic," while many Muslims read the Qur’an in ways that seem to justify sexual oppression, inequality, and patriarchy. Taking a wholly different view, Asma Barlas develops a believer’s reading of the Qur’an that demonstrates the radically egalitarian and antipatriarchal nature of its teachings.

Beginning with a historical analysis of religious authority and knowledge, Barlas shows how Muslims came to read inequality and patriarchy into the Qur’an to justify existing religious and social structures and demonstrates that the patriarchal meanings ascribed to the Qur’an are a function of who has read it, how, and in what contexts. She goes on to reread the Qur’an’s position on a variety of issues in order to argue that its teachings do not support patriarchy. To the contrary, Barlas convincingly asserts that the Qur’an affirms the complete equality of the sexes, thereby offering an opportunity to theorize radical sexual equality from within the framework of its teachings. This new view takes readers into the heart of Islamic teachings on women, gender, and patriarchy, allowing them to understand Islam through its most sacred scripture, rather than through Muslim cultural practices or Western media stereotypes.

For this revised edition of Believing Women in Islam, Asma Barlas has written two new chapters—“Abraham’s Sacrifice in the Qur’an” and “Secular/Feminism and the Qur’an”—as well as a new preface, an extended discussion of the Qur’an’s “wife-beating” verse and of men’s presumed role as women’s guardians, and other updates throughout the book.

Asma Barlas is a professor of politics at Ithaca College. Her other books include Re-understanding Islam: A Double Critique and Islam, Muslims, and the US: Essays on Religion and Politics.

[A] brilliantly executed work. . . . a new generation of scholar-activists . . . will take cues from such a study to open up interpretations and modes of Islamic praxis that will resonate with the avowedly non-repressive divine intentions for Muslim and other faith communities worldwide.
— Arab Studies Journal

The strength of Barlas’s work is its dual focus on methods of reading and the specific issue of patriarchal interpretations of the Qur’an. It is an interesting contribution to contemporary Muslim thought that will be useful in teaching a broad range of undergraduate and graduate courses.
— International Journal of Middle East Studies

A fascinating analysis of the woman’s position in Muslim society. . . . Barlas clearly lights a path in the Qur’an that allows Muslim women to break free of many patriarchal readings previously established.
— H-Gender-MidEast

Barlas’s thesis is irresistible: the Qur’an itself has a very positive view of women whereas patriarchal culture caused the various interpreters of the Qur’an to read their own biases into the text to justify the oppression of women. . . . This book is loaded with interesting facts about Islam that may even surprise Muslims.
— Publishers Weekly

Asma Barlas offers a refreshing analysis on the role of women in Islam by unwinding patriarchal interpretations of the Quran.
— The New Arab

Muslim feminists have two tedious battles to fight: one against those who hold on to patriarchal notions within their own community, and the other against feminists who refuse any reconciliation between feminism and any 'Abrahamic' religion, including Islam…Asma Barlas takes on these two battles with prevision, clarity and a clear purpose.
— Egyptian Streets

[Barlas] expands on the first edition by adding two new chapters that serve to strengthen and defend the premise that the Qur'an does not enforce the patriarchy and culminate in a comprehensive framework for understanding the inherent egalitarianism she argues the Qur'an professes.
— Middle East Journal

Barlas demonstrates how a Muslim believer can fully adopt an antipatriarchal reading of the Qur’anic text while maintaining belief in its Divine Providence. The intervention she makes is thus as useful to those studying the Quran (and scriptural interpretation more broadly) in the western academy as it is to Muslims searching for renewed ways to interpret their Divine Scripture in a more egalitarian spirit...This book is a passionate clarion call to dig deeper into how we receive, understand, and interpret scripture regardless of our faith commitments.
— New Books in Middle Eastern Studies