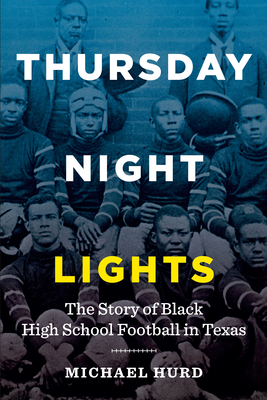 Thursday Night Lights tells the inspiring, largely unknown story of African American high school football in Texas. Drawing on interviews, newspaper stories, and memorabilia, Michael Hurd introduces the players, coaches, schools, and towns where African Americans built powerhouse football programs under the PVIL leadership. He covers fifty years (1920–1970) of high school football history, including championship seasons and legendary rivalries such as the annual Turkey Day Classic game between Houston schools Jack Yates and Phillis Wheatley, which drew standing-room-only crowds of up to 40,000, making it the largest prep sports event in postwar America. In telling this story, Hurd explains why the PVIL was necessary, traces its development, and shows how football offered a potent source of pride and ambition in the black community, helping black kids succeed both athletically and educationally in a racist society.

Michael Hurd is the director of Prairie View A&M University’s Texas Institute for the Preservation of History and Culture, which documents the history of African American Texans. He has worked as a sports writer for the Houston Post, the Austin American-Statesman, USA Today, and Yahoo Sports. Hurd’s previous books include Black College Football, 1892–1992: One Hundred Years of History, Education, and Pride. For more than a decade, he served as a member of the National Football Foundation’s Honors Court for Divisional Players, the group that chooses small college players for the College Football Hall of Fame, and he currently serves on the selection committee for the Black College Football Hall of Fame.

[Hurd has] seen a lot. And he understands the connections between sports, especially football, and other, often riven cultural expressions of our state.
— Austin American-Statesman

Though this book is long overdue, it is also right on time. We are currently having a collective cultural discussion about whose history gets told, how we choose whose stories matter, and which historical characters get cast, quite literally, in stone or metal to be celebrated for years to come. Hurd shows that the stories we tell ourselves about the history of football in Texas are woefully incomplete.
— Texas Observer

Hurd's work should prove essential to those interested in examining the racial politics of sports at the high school level, college recruitment, and desegregation.
— Journal of Sport History

In America's current Colin Kaepernick-inspired moment, with sports once again taking on a conspicuous role in debates about black citizenship and the persistence of white racism, this book is especially timely and important.
— Great Plains Quarterly