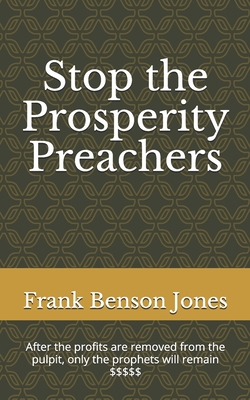 
Not On Our Shelves—Ships in 1-5 Days
(This book cannot be returned.)
"AFTER THE PROFITS ARE REMOVED FROM THE PULPIT, ONLY THE PROPHETS WILL REMAIN." says Pastor Frank Benson Jones. The pro$perity preacher$ are robbing the poor and cheating America. They can receive very large salaries every year and pay no income tax. They promise the people who give them donations that those people will become wealthy also, but when those who make the donations don't receive the promised wealth, they are told the problem is they don't have enough faith. The real problem is that prosperity preaching only works for the pro$perity preacher$. The pro$perity preacher$ live lavish life styles made possible by tax free allowances and income, and they are misusing and exploiting the religious freedom that many Americans have fought to protect and died to maintain. In this book Pastor Frank Benson Jones offers Biblical proof of the fallacies of the pro$perity preacher$, and in the closing chapters, he offers some suggestions of how the American people and government can $TOP THE PRO$PERTY PREACHER$ from robbing American citizens. AUTHOR'S NOTE: All Americans are being cheated, so even if you are not a Christian or if you do not believe the Bible, you should read chapters 12 and 13 to see how the pro$perity preacher$ evade paying taxes and how you and the government can stop them.
Frank Benson Jones is currently the pastor of a small congregation in Compton, California, and for over 35 years he has been an advocate for full financial disclosure from churches and religious organizations. Frank was an officer and pilot in the U.S. Air Force, and he served in combat in Vietnam and worked in top secret special operations before becoming the second Black pilot to be hired by United Airlines. After leaving the military, and while still working as an airline pilot, Frank joined the Black Panther Party and rose from being a rank-and-file street panther to becoming the Deputy Minister of Information, managing editor of the Black Panther Newspaper, and a member of the Black Panther Central Committee which was the group that made the policies that were to be followed by all members of the party. After accepting the call of God into the Christian ministry, Frank was appalled by the financial practices of some of his fellow preachers. He saw rich preachers using trickery and concealment to exploit the poor people who trusted them, and he vowed to work to bring financial integrity back to the church. Frank believes that "AFTER THE PROFITS ARE REMOVED FROM THE PULPIT, ONLY THE PROPHETS WILL REMAIN." Frank says he has put down the gun and has picked up the "sword of the Spirit, which is the word of God." (Ephesians 6:17) Frank also says he fought for all Americans as a pilot; he fought for all Black Americans as a panther; and now he will fight for all of God's people as a preacher.