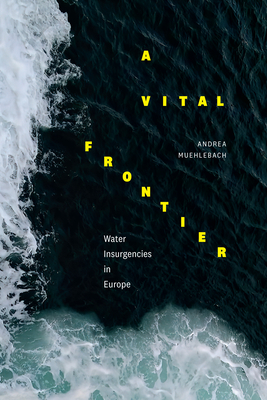 
Coming Soon—Pre-Order Now
In A Vital Frontier Andrea Muehlebach examines the work of activists across Europe as they organize to preserve water as a commons and public good in the face of privatization. Traversing social, political, legal, and hydrological terrains, Muehlebach situates water as a political fault line at the frontiers of financialization, showing how the seemingly relentless expansion of capital into public utilities is being challenged by an equally relentless and often successful insurgence of political organizing. Drawing on ethnographic research, Muehlebach presents water protests as a vital politics that comprises popular referenda, barricades in the streets, huge demonstrations, the burning of utility bills, and legal disputes over transparency and contracts. As Muehlebach documents, Europe's water activists articulate their own values of democracy and just price, raising far-reaching political questions about private versus common property and financing, liberal democracy, sovereignty, legality, and collective infrastructural responsibility in the face of financialization and commodification. Muehlebach shows that water-rights activists can successfully resist financial markets by exposing the commodification of water as the theft of life itself.
Andrea Muehlebach is Professor of Maritime Anthropology and Cultures of Water at the University of Bremen and author of The Moral Neoliberal: Welfare and Citizenship in Italy.