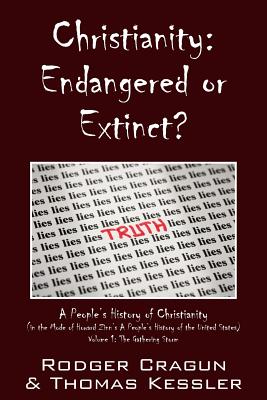 
Not On Our Shelves—Ships in 1-5 Days
(This book cannot be returned.)
Christianity Endangered or Extinct? A People's History of Christianity is a blockbuster for all Christians in the 21st Century. Volume I: The Gathering Storm is about the origins of a great divide that began in 100 - 430 CE, during Christianity's formative stages, between Jesus of Nazareth's teachings and the Christianity we have inherited. Cragun and Kessler outline how the so-called "Fathers of the Church" took over the community of Jesus, destroyed its foundations, and built their own church edifice, which has been transmitted to us. Step by step, the authors utilize the very words of these philosophers to show how the movement of Jesus became, in reality, the church of philosophers and the Roman Empire. In their zeal to establish themselves as the inheritors of Christ's message, they coined a new word, "heretic", and pinned it on those who opposed them, gradually stifling dissent. Though much of modern scholarship blames Constantine for the corruption of the Church, Cragun and Kessler document that the corruption was a gradual process in which Platonic philosophy, power, and prestige gradually entombed the message Jesus actually gave us. They demonstrate that this religion was carefully honed to be acceptable to emperors, rulers and the elite - replacing Christ's message of love, egalitarianism, communalism, pacifism, and servant leadership. Cragun and Kessler have written a true People's History of Christianity, in the tradition of Howard Zinn's People's History of the United States. Within this perspective, they received help in their analysis from such notables as Elizabeth Sch ssler Fiorenza and Michael Foucault and others. Concerned that much of what parades itself as the "people's history" of Christianity today fails to do adequate class, economic, and sociological analysis. The authors have attempted to remedy this by providing more comprehensive scholarly research.