Solving the Bible Puzzle: Fitting the Scriptures Properly Together (Hardcover) 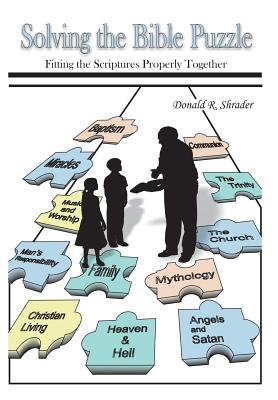 Solving the Bible Puzzle: Fitting the Scriptures Properly Together (Hardcover)


Not On Our Shelves—Ships in 1-5 Days
(This book cannot be returned.)
Don Shrader is a former Air Force Master Instructor Pilot, mechanical automation engineer, patent holder, and currently a consultant assisting major corporations capture and execute Air Force R&D contracts. So what would motivate this non-Seminarian to write a theology book as his first book? It was his overwhelming concern, first for his grandchildren and their heritage, and then others, regarding the lack of teaching in the church today on the true historical doctrines of the faith. He was greatly motivated to produce a work that could help people of all walks-of-life know, understand, and believe in those doctrines. To do that, he has not only provided the scriptural basis for his conclusions but also given the reader much of the history regarding the development of the Bible and various doctrines. Throughout the book, he has provided varying viewpoints, and then given the reasoning behind the doctrines he embraces. By the title and cover, some may assume that this is a children's book. That is not the case. In over 50 years of teaching the Bible to others, Don has often used the analogy, reflected in the title, that the Bible is like a giant jigsaw puzzle. Some pieces often seem to fit where they do not actually belong resulting in a puzzle improperly fit together, i.e., resulting in improper doctrines and teachings. When all the pieces are properly fit together, the doctrines, like the completed puzzle, form a unified whole. Those who have read pre-production copies of the book have consistently stated that while quite thorough on its many topics it is both readable and understandable. Written in narrative style rather than a classical academic textbook manner, most reviewers agreed that the many details and the presentation of variant views added credibility to the conclusions demonstrating true biblical scholarship. The book covers a wide range of theological subjects including a history of the development of Bible from its original inscripturation to the present day English Bibles. The book's many topics range from soteriology to eschatology to the beginnings of mythology and its effect on the Bible and the Church. Topics also include proper church structure and ordinances as well as Christian living based upon the doctrine of sole competency of the believer. It further contains a listing of recommended theology books divided into categories from those that are a must for any personal theology library to those that would be good to have. Finally, in a somewhat unique variance from most books, it includes the author's personal testimony that provides the circumstances in his life that ultimately laid the foundation for this book.