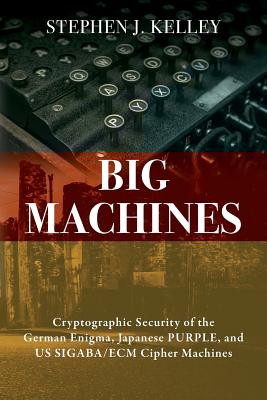 
Not On Our Shelves—Ships in 1-5 Days
(This book cannot be returned.)
Why do some cryptographic systems fail and others succeed? Stephen Kelley's new book, Big Machines, explores this fundamental question of cryptology by examining the history of three of the most renowned cipher systems of World War II - the German Enigma, the Japanese PURPLE, and the American SIGABA/ECM - to understand why the first two were broken by the allies and last remained unbroken. Were the allies' successes against Enigma and PURPLE due to inherent weaknesses in the Axis' machines, to poor communications security procedures, to physical compromise, or to all three? Was their failure to break the SIGABA/ECM due to the strength built into the American cipher or to Axis cryptanalytic incompetence? Big Machines investigates the histories of these three cryptosystems - how they were designed, how they were used, and how they were attacked by hostile cryptanalysts. Mr. Kelley compares the strengths and weaknesses inherent in each machine, and considers external factors influencing their ultimate security. Big Machines helps explain the allies overwhelming victory in the critical information war with Germany and Japan. Aegean Park Press is pleased to offer this unique and valuable addition to the literature of both cryptology and the Second World War.