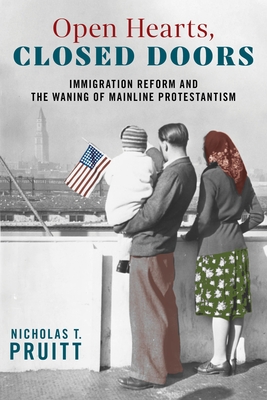 Open Hearts, Closed Doors uncovers the largely overlooked role that liberal Protestants played in fostering cultural diversity in America and pushing for new immigration laws during the forty years following the passage of the restrictive Immigration Act of 1924. These efforts resulted in the complete reshaping of the US cultural and religious landscape. During this period, mainline Protestants contributed to the national debate over immigration policy and joined the charge for immigration reform, advocating for a more diverse pool of newcomers. They were successful in their efforts, and in 1965 the quota system based on race and national origin was abolished. But their activism had unintended consequences, because the liberal immigration policies they supported helped to end over three centuries of white Protestant dominance in American society. Yet, Pruitt argues, in losing their cultural supremacy, mainline Protestants were able to reassess their mission. They rolled back more strident forms of xenophobia, substantively altering the face of mainline Protestantism and laying foundations for their responses to today's immigration debates. More than just a historical portrait, this volume is a timely reminder of the power of religious influence in political matters.
Nicholas T. Pruitt is Assistant Professor of History at Eastern Nazarene College.