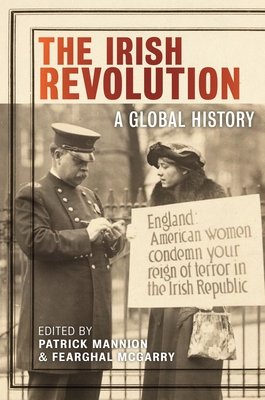 How the Irish Revolution was shaped by international actors and events

The Irish War of Independence is often understood as the culmination of centuries of political unrest between Ireland and the English. However, the conflict also has a vitally important yet vastly understudied international dimension. The Irish Revolution: A Global History reassesses the conflict as an inherently transnational event, examining how circumstances and individuals abroad shaped the course Ireland's struggle for independence. Bringing together leading international scholars of modern Ireland, its diaspora, and the British Empire, this volume discusses the Irish revolution in a truly global sense. The text situates the conflict in the wider context of the international flourishing of anti-colonial movements following World War I. Despite the differences between these movements, their proponents communicated extensively with each other, learning from and engaging with other revolutionaries in anti-imperial metropoles such as Paris, London, and New York. The contributors to this volume argue that Irish nationalists at home and abroad were intimately involved in this exchange, from mobilizing Ireland's vast diaspora in support of Irish independence to engaging directly with radical causes elsewhere. The Irish Revolution is a vital work for all those interested in Irish history, providing a new understanding of Ireland's place in the evolving postwar world.
Patrick Mannion (Editor) Patrick Mannion is Research Fellow in Irish History at the University of Edinburgh, where he works on the AHRC-funded project A Global History of Irish Revolution, 1916-23. He is the author of the prize-winning book A Land of Dreams: Ethnicity, Nationalism, and the Irish in Newfoundland, Nova Scotia, and Maine, 1880-1923. Fearghal McGarry (Editor) Fearghal McGarry is Professor of Irish History at Queen's University Belfast. He has authored and edited many books, including The Rising--Ireland: Easter 1916, Eoin O'Duffy: A Self-Made Hero, and Remembering 1916. The Easter Rising, the Somme and the Politics of Memory in Ireland.