Keeping Family Secrets: Shame and Silence in Memoirs from the 1950s (Hardcover) 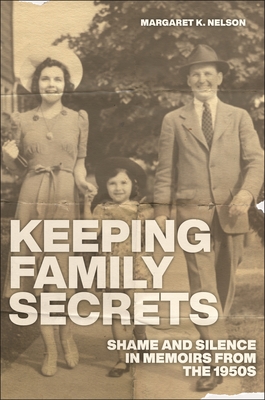 Keeping Family Secrets: Shame and Silence in Memoirs from the 1950s (Hardcover)

From teen pregnancy and gay sexuality to Communism and disability, the startling secrets that families kept during the Cold War era

All families have secrets but the facts requiring secrecy change with time. Nowadays A lesbian partnership, a "bastard" son, an aunt who is a prostitute, or a criminal grandfather might be of little or no consequence but could have unraveled a family at an earlier moment in history. Margaret K. Nelson is interested in how families keep secrets from each other and from outsiders when to do otherwise would risk eliciting not only embarrassment or discomfort, but profound shame and, in some cases, danger. Drawing on over 150 memoirs describing childhoods in the period between the aftermath of World War II and the 1960s, Nelson highlights the importance of history in creating family secrets and demonstrates the use of personal stories to understand how people make sense of themselves and their social worlds. Keeping Family Secrets uncovers hidden stories of same-sex attraction among boys, unwed pregnancies among teenage girls, the institutionalization of children with mental and physical disabilities, participation in left-wing political activities, adoption, and Jewish ancestry. The members of ordinary families kept these issues secret to hide the disconnect between the reality of their own family and the prevailing ideals of what a family should be. Personal accounts reveal the costs associated with keeping family secrets, as family members lie, hurl epithets, inflict abuse, and even deny family membership to protect themselves from the shame and danger of public knowledge. Keeping Family Secrets sheds light not only on decades-old secrets but pushes us to confront what secrets our families keep today.
Margaret K. Nelson is A. Barton Hepburn Professor of Sociology Emerita at Middlebury College. Most recently she is the author of Like Family: Narratives of Fictive Kinship and co-author, with Emily K. Abel, of Limited Choices: Mable Jones, A Black Children's Nurse in a Northern White Household.