The Bully Society: School Shootings and the Crisis of Bullying in Americaas Schools (Intersections #6) (Paperback) 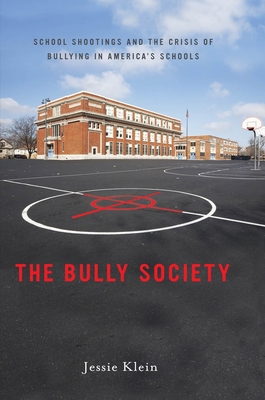 The Bully Society: School Shootings and the Crisis of Bullying in Americaas Schools (Intersections #6) (Paperback)

Through interviews and case studies, Klein develops an explanation for bully behavior in America's schools In today's schools, kids bullying kids is not an occasional occurrence but rather an everyday reality where children learn early that being sensitive, respectful, and kind earns them no respect. Jessie Klein makes the provocative argument that the rise of school shootings across America, and childhood aggression more broadly, are the consequences of a society that actually promotes aggressive and competitive behavior. The Bully Society is a call to reclaim America's schools from the vicious cycle of aggression that threatens our children and our society at large. Heartbreaking interviews illuminate how both boys and girls obtain status by acting "masculine"--displaying aggression at one another's expense as both students and adults police one another to uphold gender stereotypes. Klein shows that the aggressive ritual of gender policing in American culture creates emotional damage that perpetuates violence through revenge, and that this cycle is the main cause of not only the many school shootings that have shocked America, but also related problems in schools, manifesting in high rates of suicide, depression, anxiety, eating disorders, self-cutting, truancy, and substance abuse. After two decades working in schools as a school social worker and professor, Klein proposes ways to transcend these destructive trends--transforming school bully societies into compassionate communities.
Jessie Klein is Assistant Professor of Sociology/Criminal Justice at Adelphi University. Over the last two decades, she also led and administered high school guidance programs. She served as a supervisor, school social worker, college adviser, social studies teacher, substance abuse prevention counselor and conflict resolution coordinator. Her writing appears in scholarly journals as well as popular media. She is available for speaking events; and offers consultations for schools interested in building compassionate communities leading to more peaceful, effective and productive education environments.