The World Is Not a Rectangle: A Portrait of Architect Zaha Hadid (Hardcover) 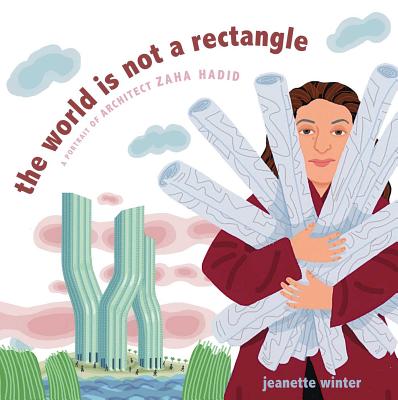 The World Is Not a Rectangle: A Portrait of Architect Zaha Hadid (Hardcover)

Get to know Zaha Hadid in this nonfiction picture book about the famed architect’s life and her triumph over adversity from celebrated author-illustrator Jeanette Winter.

Zaha Hadid grew up in Baghdad, Iraq, and dreamed of designing her own cities. After studying architecture in London, she opened her own studio and started designing buildings. But as a Muslim woman, Hadid faced many obstacles. Determined to succeed, she worked hard for many years, and achieved her goals—and now you can see the buildings Hadid has designed all over the world.
Jeanette Winter is a celebrated picture book creator whose acclaimed works include The Snow Man; The Little Owl & the Big Tree: A Christmas Story; Oil; The Secret Project; and Diego, all written by Jonah Winter, and her own Biblioburro: A True Story from Colombia; Nasreen’s Secret School: A True Story from Afghanistan; and Our House Is on Fire: Greta Thunberg’s Call to Save the Planet, which has been translated into twenty-one languages.

Jeanette Winter is a celebrated picture book creator whose acclaimed works include The Snow Man; The Little Owl & the Big Tree: A Christmas Story; Oil; The Secret Project; and Diego, all written by Jonah Winter, and her own Biblioburro: A True Story from Colombia; Nasreen’s Secret School: A True Story from Afghanistan; and Our House Is on Fire: Greta Thunberg’s Call to Save the Planet, which has been translated into twenty-one languages.
A visionary architect from Iraq gets well-deserved attention in Winter's new picture-book biography about a woman of courage whose ideas and persistence influenced the world. Zaha Hadid, a native of Baghdad, grows up admiring nature and patterns. She designs her own clothes, wonders at the ruins in her homeland, and dreams of designing cities. "Zaha has ideas." Zaha studies math, then leaves home to study architecture in London. She then sets to work planning and designing what the world has never seen: buildings conceived after the shapes and patterns of nature. Working past the initial rejection and discrimination she faces, Zaha grows her firm from one room to an entire building. Eventually, her designs are built all over the world. Her architects continued "making models of her visions" even after her death, which is gently portrayed in this book for young readers. The illustrations in this portrait are fresh and spare, highlighting the concepts behind Zaha's designs. As in Winter's other picture books, the use of color, shape, and pattern in the artwork pairs beautifully with the straightforward text to tell this intriguing story. The text makes a delightful read-aloud, and it's engaging enough to grab the attention of independent readers as well. This powerful biography is a boon for all children and is particularly valuable for children outside of the mainstream who have large visions and dreams of their own. (author's note, sources.) (Picture book/biography. 5-10
— Kirkus, STARRED REVIEW

Even as a child, Zaha Hadid was fascinated by the landscapes and ruins of her native Iraq, seeing patterns in them she later repeated in her urban designs. Her unusual ideas prompted her to study architecture in London and eventually open Studio 9, an office in which she and her colleagues designed unconventional buildings that epitomized her mantra, “The world is not a rectangle.” Despite criticism and setbacks, Hadid’s belief in the impossible led to commissions to design a museum, an opera house, a stadium, and even a ski jump, which incorporated their surrounding landscapes into the core of their structures. When she died in 2016, Hadid had the distinction of being the only woman to receive both the Pritzker Prize and the Royal Gold Medal for her inventive sense of design. From its catchy title to the clear depiction of its extraordinary subject, this book will appeal to elementary students, particularly those craving daring role models. The simple text flows as easily as Hadid’s ideas, and Winter’s painterly acrylic illustrations are its perfect complement, bringing to life a rather stern artist intent on realizing her artistic visions against all odds. Art teachers can use the endpapers’ portrayals of Hadid’s unusual structures to help students create their own landscape-inspired designs, and mention of her Iraqi heritage could prompt discussions on global artists. VERDICT Ripe with ties to curricula, this is a great choice for art and ­biography collections.
— School Library Journal

Direct quotations from Iraqi-British architect Zaha Hadid pepper this spare but engrossing biography from Winter (Nanuk the Ice Bear). After moving quickly through Hadid’s childhood, highlighting her fascination with local “rivers and marshes and dunes and ruins,” Winter devotes several pages to her remarkable designs: “tall buildings dancing like grass” (the Signature Towers of Dubai), “an opera house like the pebbles in the water” (China’s Guangzhou Opera House), and others. The undulating shapes and milky colors of Winter’s images emphasize the connections between the structures and their natural inspirations, and Hadid’s commitment to her designs features prominently: “Hadid means iron in Arabic, and Zaha is strong as iron,” writes Winter as Hadid fixes readers with a steely gaze. It’s a stirring reminder of how far nontraditional thinking and dedication to one’s ideals can take a person.
— Publishers Weekly *STARRED REVIEW

Iranian architect Zaha Hadid drew inspiration for her designs from the natural world, which she famously

stated “is not a rectangle.” As a result, her buildings swoop, curve, twist, and flow. Winter opens with an

overview of Zaha’s childhood and education, paying particular attention to the ruins, deserts, and marshes

she visited with her father during her youth, because these are the sites that sparked her passion for design

and her unique style. Winter does an excellent job of utilizing double-page spreads to link several of

Zaha’s famous buildings with the object or vista upon which they were modeled. A simple seashell

transforms into a sports stadium; marsh grasses inspire a cluster of kinked apartment towers; the galaxy’s

perfectly reflecting the architect’s organic design philosophy. Readers will also come away with a firm

sense of Zaha’s tenacity and determination as she refuses to be held back by her ethnicity, gender, or

unconventional ideas. The book closes with a guide to the buildings featured in the story, noteworthy

quotes from Zaha, and a short bio. A fantastically crafted picture-book biography on a woman deserving of

As a child growing up in Baghdad in the 1950s and 1960s, Zaha Hadid’s love for math allowed her to see the world through a unique lens; she observed carpet patterns (seeing how the “shapes and colors flow into each other”), dreamed of ancient ruins, and observed nature. Her creative thoughts inspired her to become an architect, and she went on to design extraordinary and unusual structures: “Zaha’s designs don’t look like other designs. Her buildings swoosh and zoom and flow and fly.” Winter quotes Hadid as saying, “The beauty of the landscape— where sand, water, reeds, birds, buildings, and people all somehow flow together—has never left me,” and Winter’s rich-hued, multilayered illustrations visually unite readers with the spirit of Hadid’s architectural creations. A series of spreads shows the artist at work while holding or viewing natural-world or cultural objects, juxtaposed with images of the structures she created that were
inspired by those objects, whether suggesting shape, form, or color (“Zaha looks at stones in a stream and builds an opera house like the pebbles in the water”). Once again, Winter (The Librarian of Basra, rev. 1/05; Nasreen’s Secret School, rev. 11/09) opens the door for younger children to read about an innovative and strong woman who inspired others in her field and worked tirelessly to make her vision become a reality. Back matter includes a pictorial list of Hadid’s structures, sources, and a brief author’s note.
— The Horn Book Magazine

Winter introduces Iraqi- born, British-educated Zaha Hadid—the first woman to be awarded architecture’s prestigious Pritzker Prize—who a century later would bring elements from nature (reed bundles, half-opened shells, waves, spiral galaxies) and drop their outsized iterations into sites throughout Asia and Europe. [The] illustrations reflect the designs of their [subject]... [and incorporate] the architect’s imagination at play alongside actual buildings come to life....also supplies a list of resources and closing author notes.
— BCCB