They Probably Lied: An anatomy of a real estate fraud and how to avoid becoming a victim (Paperback) 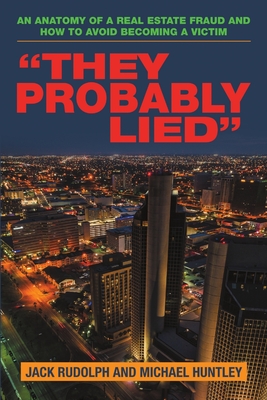 They Probably Lied: An anatomy of a real estate fraud and how to avoid becoming a victim (Paperback)


Not On Our Shelves—Ships in 1-5 Days
(This book cannot be returned.)
Jack Rudolph and Michael Huntley were chasing the American Dream for themselves and their families when they stumbled across a sixty-six-unit complex in Corpus Christi, Texas. It was known as the Crestview Apartments, and even though it was listed at $1.73 million, it seemed to be a great deal as it not only boasted 95 percent occupancy but 95 percent paid occupancy. That should have been the first red flag, but the partners ultimately bought the complex from Daniel and June Feng, two Chinese immigrants who held the property in their LLC, Shanghai Investments. In this cautionary tale for real estate investors: - If it sounds too good to be true, it probably is. - Always insist on more than one piece of verifiable income. - Do not enter into an agreement with a seller based exclusively upon his or her own self-generated financial statements, even if they are written in gold ink.

JACK RUDOLPH is a part-time real estate investor and owns Jack Rudolph Inc., which is a manufacturers rep firm to the military and government industry in Southern California. He graduated from San Diego State University where he majored in business with a concentration in marketing and a minor in Spanish. He has invested in more than a dozen multifamily properties across the United States and holds a real estate license in California.

MICHAEL HUNTLEY works for the Planning Department in Los Angeles County and is Rudolph's business partner. He has spent over nearly four decades in the in the land use and regulatory profession. For most of that period, he worked for a public sector land-use regulatory agency where he managed various sections of the agency responsible for permitting residential and commercial developments, completion of environmental documents, and for code compliance efforts. He now works as a private consultant assisting clients with the land use entitlement process. He has been Rudolph's investment partner since 2006.

“They Probably Lied” is an excellent choice for any beginning multi-family investor. The Tips will save you time, money and heartache. Reading through these tips brought back some many memories from my early deals because I made many of the mistakes the Tips help you to avoid. Tip 48 is a tip that only an experienced investor would know. I use this Tip as a way to stop small problems become big problems. David Lindahl, author of “Multi Family Millions”

“They Probably Lied” has some valuable lessons, some of which I’ve experienced myself. I’ve recommended this book to the students in my Gold Club”. Ron LeGrand