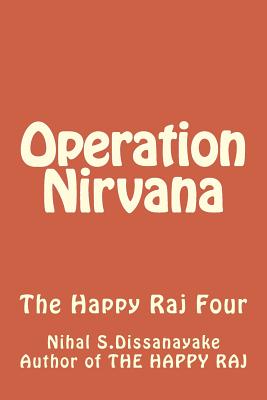 
Not On Our Shelves—Ships in 1-5 Days
(This book cannot be returned.)
- Book title: OPERATION NIRVANA - Series title: HAPPY RAJ SAGA SERIES - Volume: FOUR Happy Raj Saga Series What is the best investment opportunity in the world? After an exhaustive survey, enigmatic billionaire Professor Happiraja decides to invest his billion-dollar legacy in a beautiful island, and baptizes it as the Happy Raj. His noble and lofty objective is to increase the stock of happiness in the Planet Earth. He builds the Happy Raj Meditation Center as his launch pad, and develops the Sotapatti Meditation Program as his vehicle to help meditators to expedite their march towards Nirvana. The Happy Raj Saga is about Professor Happiraja and his happiness operations. It runs through a series of six different novels with a common theme: Happiness Through Meditation. The first novel in the Saga, The Happy Raj is selected to the First Place in an open competition organized by the Government of Sri Lanka in 2010. The Saga has a small group of interesting characters. Their interactions are intricately woven together to make Happy Raj Saga, an unforgettable reading experience.With his multi-faceted training and experiences in a spectrum of fields and services, the author is trying to focus your attention to the noble art of meditation and its advantages, to enhance your happiness levels. The Saga runs on two parallel rails: the emotion-filled drama of the family of Weda Ralahamy, moves up, down, and sideways, motored by beauty queen Nangi, and her sister Akki It is filled with heart-melting pathos, nerve-wracking poignancy created by iguanas, birds, squirrels, and non-human forces such as ghosts and divine beings.Mid-ocean boat accidents, mysterious deaths, attempted suicides, the rape of an unconscious beauty queen, terrorist attacks, tsunami waves, and tornados add more sugar, spices, and vinegar to the dishes. On the other rail, run the spiritual bandwagon of Happiraja and his group of holy men and women, where philosophy-packed strategic operations such as Operation Nirvana are formulated and launched. Happiraja's elevation to the Arya Marga contributes to act as an anabolic steroid to his meditators. - Book title: OPERATION NIRVANA. It is the strategic plan of Professor Happiraja. His noble and lofty objective was to help his meditators to expedite their march towards supreme bliss in Nirvana. The genesis of the plan comes from the inability of Dada Hamuduruwo to keep pace with the others in his meditational progress. In search of a solution, Happiraja joins hands with Ayurvedic physician Weda Ralahamy, to prepare a strategic plan to help the old monk. After studying the mental activities and processes explained in the Buddhist Cannons, Happiraja initiates a series of activities to gain the insights required to expedite the march of all meditators, towards Nirvana. Sharing available knowledge among yogis, designing a multi-media exhibition, brain washing, hypnotherapy, making videos, and discussions are the activities included in his toolbox. After discussions with several intellectuals including, psychologists, psychiatrists, meditators, and Buddhist monks, Happiraja proceeds with his strategic plans to shorten their march towards Nirvana. Professor Happiraja's target for his unique strategic operations was Dada Hamuduruwo.But he dies before the plan is completed. and his body is deposited in a glass casket to help the yogis in their contemplations. Professor Happiraja delegates his official functions to the lower levels, and meditates on his plan with religious zeal. It enhances him as a Stream Winner Sotapanna]. However, the absence of any material evidence to prove his success creates a problem in making others to accept his success. The Happy Raj Saga continues even after Professor Happiraja is elevated to the Arya Marga. It acts an anabolic steroid to all meditators dreaming of Nirvana.
Author Bio: Nihal S. Dissnayake: Armed with a master's degree in business management [MBA] former clerk, lecturer, trade unionist, merchant banker, fund manager, stock broker and marketing consultant, Nihal S. Dissanayake joins the financial sector and moves up to Chief Executive Officer Levels in two powerful companies, owned by a consortium of major financial institutions. His book, The Craft of Harnessing Mind Power for Happy Living [Happicraft.com] is a collection of seventeen articles selected from his web site: www.happicraft.com He is the Founder/Chief Editor of Athwela Vyaparika Sangarawa, a Sinhala Language management journal for the SME sector. He also was the Founder/Chief Editor of Small Business International Magazine. Nihal is a graduate in economics. His MBA is from Universite des Sciences Sociales, Toulouse, in France. He also has a post-graduate diploma in International Cooperation Techniques. After his MBA, he completed a training assignment at SOCATA [Aerospatiale] Aircraft manufacturing company, in France. Back in Sri Lanka, he commenced his writing career, writing a weekly column about the Colombo Stock Market for two Sunday News Papers. Nihal has served as Executive Committee Member of the International Chamber of Commerce, [ICC Colombo Chapter] and the Sri Lanka National Chamber of Commerce. He has organized an Investment Promotion Mission to Finland, for the Merchant Bank of Sri Lanka Limited, and participated in a government mission on Investment Promotion to the United Arab Emirates. His experiences as a Chief Executive Officer, Marketing Consultant and a business publisher, combined with his professional training, in Sri Lanka, in France and in Singapore, his exposures to Buddhism and meditation, have been distilled and concocted together to offer an enjoyable series of seven story books, Happy Raj Saga Series, with considerable illuminations and analysis from Buddhist philosophy. Nihal had his preliminary training in business while working in his sister's grocery and tearooms during his school holidays and during weekends. The seven novels in the Happy Raj Saga Series: 1.The Happy Raj-Kingdom of Happiness, is an award winner. 2.Paradise Is For Ladies [Happy Raj Saga Two] 3.From Guest House To Paradise [Happy Raj Saga Three] 4.Operation Nirvana [Happy Raj Saga Four] 5.From Paradise To Nirvana [Happy Raj Saga Five] 6.From Sin Ship to Happy Raj [Happy Raj Six] 7.Meditating Into Happiness [Happy Raj Seven]