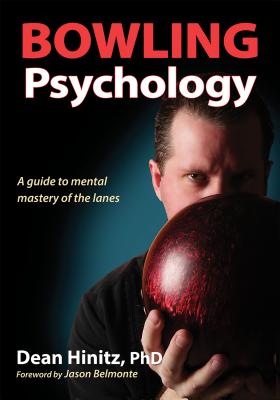 As the leading authority on bowling’s mental game, Dean Hinitz has worked with the premier players, coaches, and teams in the sport. He’s helped countless pros elevate their scores, avoid slumps, and overcome stressors impacting performance. He’s improved their play, now he’s ready for you.

In Bowling Psychology, you’ll learn the mental strategies to perform your best, day in day out. From progressive muscle relaxing techniques to positive self-talk and focus cues, you will pick up spares more consistently, improve accuracy, and overcome anxieties.

Manage pressure, find your focus, and reach your full potential With detailed information on topics including mindfulness training, sensory awareness, and the body–mind connection, Bowling Psychology is your all in one toolbox for mental mastery of the lanes.

Dean Hinitz, PhD, has been practicing sport psychology for more than 30 years. He is the sport psychologist for the U.S. bowling team, with facilities at the International Training and Research Center at USBC headquarters in Arlington, Texas, previously training at the United States Olympic Training Center in Colorado Springs. He is the lead mental game consultant in revising the curriculum for the United States Bowling Congress Gold Coaching Program.

Hinitz has worked with numerous champions on the men’s and women’s pro bowling tours as well as with many amateur champions. For more than 10 years, he was a staff writer for Bowling This Month. He is considered by many to be the leading authority worldwide on the mental game of bowling.

Hinitz earned his PhD in psychology from the University of Nevada at Reno, where he is an adjunct professor. He is a former governor’s appointee to the Nevada State Board of Psychological Examiners and was previously the chief of psychology at West Hills Hospital in Reno. Hinitz maintains a private practice in Reno.

“Bowling Psychology is for those who want to take their game to the next level. I have known Dean for many years, and I have steadfastly used his mental-training techniques with my collegiate bowlers to achieve championship results. I recommend this book to any bowler who is looking to gain a mental edge at any level of competition.”

“For many years, Dr. Hinitz gave my teams tremendous support and advice on improving our mental game. I truly believe that without his guidance my bowling team at UMES would not have achieved the success we had. He has also been instrumental in assisting teams at Georgetown University. Having the mental edge is what sets top bowlers apart from the rest, and Bowling Psychology provides competitive bowlers with mind-game strategies to excel on the lanes.”