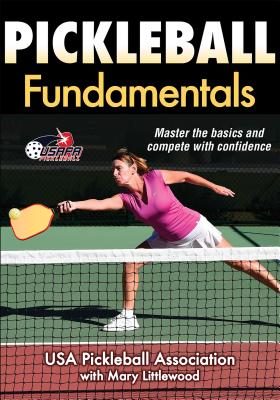 Fast, fun, and competitive: Simply step onto the court and it will be clear why pickleball is booming in popularity.

Pickleball Fundamentals is the first book written and endorsed by the USA Pickleball Association. It will teach you the basics of the sport so that you can join the fun on the court right away.

Learn proper execution of the sport’s essential skills and tactics. All the shots—groundstroke, serve and return, volley, dink, lob, overhead smash, and drop—provide a base for solid technique.

More than 40 drills and gamelike activities will speed your learning while improving performance. You’ll also find competitive tactics for various scenarios and strategies for both singles and doubles play.

So whether you are new to the sport or one of the growing number of pickleball fanatics, Pickleball Fundamentals is the best way to master the basics and compete with confidence.

The USA Pickleball Association (USAPA) originated in the mid-1980s and became the official governing body of pickleball in 2005. Its mission is to promote the growth and development of pickleball throughout the world. This organization provides players with official rules, sanctioned tournaments, rankings, promotional materials, and training. The number of dedicated pickleball courts in the United States is increasing 50 percent each year.

Mary Littlewood taught physical education and coached various sports at the university level. She was head softball coach and head volleyball coach of the NCAA Division I program at Arizona State University.

After retirement, Littlewood discovered pickleball. She began competing in the Arizona Senior Olympics, Huntsman World Senior Games, and other tournaments, earning several gold, silver, and bronze medals. This success merged with Littlewood’s enthusiasm for the game and education, leading her to teach pickleball in clinics all over Arizona.

She wrote The History of Women’s Fastpitch Softball: The Path to the Gold, published by the National Fastpitch Coaches Association. She also is the author of Teaching for Success in Pickleball, Drilling for Success in Pickleball, and Pickleball: A Guide for Teaching. She published From Rags to Riches, a memoir of her experiences at ASU from the pre- to post-Title IX years. Littlewood currently writes a Coaching Tips column for her pickleball club website.