Something in the Air: American Passion and Defiance in the 1968 Mexico City Olympics (Paperback) 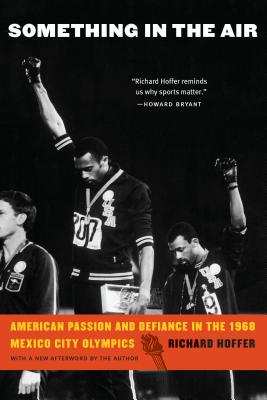 Something in the Air: American Passion and Defiance in the 1968 Mexico City Olympics (Paperback)


On Our Shelves Now at:
Something in the Air is Richard Hoffer’s gripping sports narrative that tells the individual stories of the athletes who gathered in Mexico City in 1968, a year of dramatic upheaval around the world. Racial tensions were high on the U.S. Olympic team, where inflamed black athletes had to choose between demands for justice, on the one hand, and loyalty to country, on the other.

Although basketball star Lew Alcindor (later to become the great Kareem Abdul-Jabbar) decided not to participate, heavyweight boxer George Foreman not only competed and won a gold medal but waved a miniature American flag at foreign judges. Sprinters Tommie Smith and John Carlos became as famous for their raised-fist gestures of protest as for their speed on the track. No one was prepared for Bob Beamon’s long jump, which broke the world record by a staggering twenty-two inches. And then there was Dick Fosbury, the goofball high jumper whose backward, upside-down approach to the bar (the “Fosbury Flop”) baffled his coaches while breaking records.

Filled with human drama, Something in the Air is a powerful, unforgettable tale that will resonate with sports fans and readers of social history alike. This edition features a new afterword by the author on the fiftieth anniversary of the Olympics.

Richard Hoffer was a senior writer at Sports Illustrated for nineteen years and is the author of A Savage Business: The Comeback and Comedown of Mike Tyson, Jackpot Nation, and Bouts of Mania: Ali, Frazier, and Foreman—and an America on the Ropes. He lives in Santa Barbara, California, with his wife.

“Richard Hoffer reminds us why sports matter, deftly returning to the roiling 1968 Olympics, when it was the athlete who often stood at the forefront of social change. . . . Something in the Air reconnects sports to America, as it should be. It is a truly terrific book.”—Howard Bryant, ESPN senior writer and author of Juicing the Game

“Richard Hoffer has given us a wonderful cross-section of characters and a thorough portrayal of the controversial events surrounding the 1968 Olympics, so that we learn to appreciate these Mexico City Games in a way we never did before. It’s sports history at both its finest and most fun.”—Frank Deford, Sports Illustrated senior contributing writer

“Suddenly, as if picked up by some gust, you’re hurtled into the political, cultural, and athletic tempest of 1968, and into the hearts and minds of the American Olympians in its swirl. That gust is Richard Hoffer’s exhilarating prose. Just go with the wind.”—Gary Smith, Sports Illustrated senior writer

“[Hoffer’s] jaunty but disciplined prose puts the wind at the reader’s back and shows us how the leaps, lifts and dashes of 1968 made a significant impact on the civil rights movement and raised the political consciousness of athletes.”—Gordon Marino, New York Times