The Umpire Is Out: Calling the Game and Living My True Self (Hardcover) 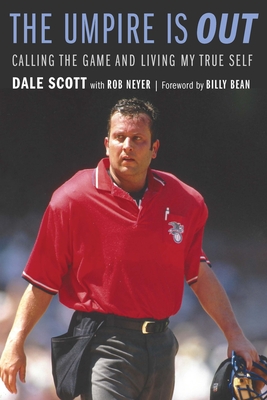 The Umpire Is Out: Calling the Game and Living My True Self (Hardcover)


On Our Shelves Now at:
Dale Scott’s career as a professional baseball umpire spanned nearly forty years, including thirty-three in the Major Leagues, from 1985 to 2017. He worked exactly a thousand games behind the plate, calling balls and strikes at the pinnacle of his profession, working in every Major League Baseball stadium, and interacting with dozens of other top-flight umpires, colorful managers, and hundreds of players, from future Hall of Famers to one-game wonders.

Scott has enough stories about his career on the field to fill a dozen books, and there are plenty of those stories here. He’s not interested in settling scores, but throughout the book he’s honest about managers and players, some of whom weren’t always perfect gentlemen. But what makes Scott’s book truly different is his unique perspective as the only umpire in the history of professional baseball to come out as gay during his career. Granted, that was after decades of remaining in the closet, and Scott writes vividly and movingly about having to “play the game”: maintaining a facade of straightness while privately becoming his true self and building a lasting relationship with his future husband. He navigated this obstacle course at a time when his MLB career was just taking off—and when North America was consumed by the HIV/AIDS epidemic.

Scott’s story isn’t only about his leading a sort of double life, then opening himself up to the world and discovering a new generosity of spirit. It’s also a baseball story, filled with insights and memorable anecdotes that come so naturally from someone who spent decades among the world’s greatest baseball players, managers, and games. Scott’s story is fascinating both for his umpiring career and for his being a pioneer for LGBTQ people within baseball and across sports.

Dale Scott worked as a Major League umpire until 2017 when—due to multiple concussions—he retired. His career included three World Series, three All-Star Games, six League Championship Series, twelve Division Series, and over ninety-one postseason games. An Oregon native, he lives in Portland with Michael, his husband, and their yellow Lab, Wylie. Rob Neyer serves as commissioner of the West Coast League and currently hosts the weekly podcast SABRCast with Rob Neyer. He has also written or cowritten seven books, including Power Ball: Anatomy of a Modern Baseball Game, winner of the 2018 Casey Award for Best Baseball Book of the Year. Billy Bean is vice president and special assistant to the commissioner of Major League Baseball.

"A rollicking new memoir. . . . Scott is cheery yet candid about the indignities of umpiring."—John Swansburg, New York Times

"The Umpire Is Out offers so many inside stories on great names in baseball history. Scott is honest in how he explains each encounter. He's a man you can't help but to root for in his coming years as a private (baseball) citizen. Scott truly is one of the better ambassadors of the game."—Don Laible, Bradenton Times

“Dale Scott was both consistent and approachable, perhaps the two most important qualities for an umpire. Dale’s personal story is inspirational, but his book also features vivid game stories from a truly great run at the top of his profession.”—David Cone

“Dale’s personal story differs dramatically from those of his umpiring colleagues. And yet, what also shines through is what he and so many of us have in common: an abiding love of baseball and an appreciation for what the game has meant to our lives. This is a textured story, both entertaining and meaningful. And told with uncommon grace.”—Bob Costas

“As the late, great Ernie Harwell once said to me about Dale, ‘A great umpire is like a great driver in traffic: you never notice they’re there.’ That was Dale Scott. He had a great, consistent strike zone, and I don’t recall him ever missing a call on the bases. But as good an umpire as Dale was, he’s also one of my all-time favorite people.”—Harold Reynolds

“Dale Scott umpired for more than thirty years in the big leagues. He’s seen it all, and most of the best parts seem to have wound up in these pages. But heck, I’d buy the book just for the chapter on the José Bautista Bat Flip Game!”—Dan Shulman

“For more than ten years, Dale Scott made me laugh every day. As a mentor, he taught me how to not only survive but excel in the Major Leagues, and I am forever grateful for his friendship and leadership. This memoir delivers the humor, excitement, and knowledge that only a true insider can provide. Make the right call and read this book!”—Dan Iassogna