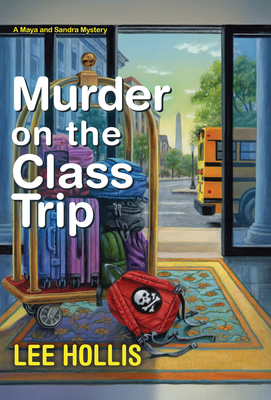 This is book number 3 in the A Maya and Sandra Mystery series.

In the new installment from veteran Hollywood screenwriter Lee Hollis, friends, moms, and P.I. partners Maya and Sandra have left their hometown of Portland, Maine, on a school trip to Washington, D.C.—where a killer has just added murder to the itinerary. . .

Drafted as chaperones, Maya Kendrick and PTA president Sandra Wallage are accompanying the SoPo High seniors to the nation’s capital—much to the embarrassment of Maya’s daughter Vanessa and Sandra’s son Ryan. Now both moms are about to find out which is harder—shepherding unruly high schoolers or solving a murder. The last sight they expected to see on this trip is a female intern who works for Sandra’s soon-to-be-ex-husband, Senator Stephen Wallage, in a fatally compromising position.

Desperate to avoid scandal, Stephen begs Maya and Sandra to solve the case. But their FBI counterparts—tough-as-nails agents Markey and Rhodes—are far less enthusiastic about the meddling of two “amateurs.” With suspects ranging from senators to students to stalkers, Maya and Sandra must follow a twisty trail of clues so they can catch a killer and survive to make the return trip . . .
Lee Hollis, the pen name for Rick Copp, is the author of the Desert Flowers Mysteries and the Maya and Sandra Mystery Series. He is also the co-author of the Hayley Powell Food & Cocktail Mysteries with his sister, Holly Simason. A veteran Hollywood screenwriter, he is the co-writer of The Brady Bunch Movie and has written for numerous television series, including The Golden Girls, Wings, Scooby-Doo, Teen Titans, and Barbershop. He also produces, writes, and stars in the hit web series Where the Bears Are. He lives in Palm Springs, California and can be found online at LeeHollisMysteries.com.