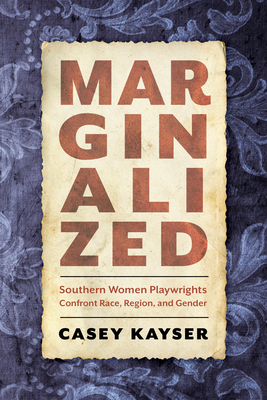 
Not On Our Shelves—Ships in 1-5 Days
Winner of the 2021 Eudora Welty Prize In contrast to other literary genres, drama has received little attention in southern studies, and women playwrights in general receive less recognition than their male counterparts. In Marginalized: Southern Women Playwrights Confront Race, Region, and Gender, author Casey Kayser addresses these gaps by examining the work of southern women playwrights, making the argument that representations of the American South on stage are complicated by difficulties of identity, genre, and region. Through analysis of the dramatic texts, the rhetoric of reviews of productions, as well as what the playwrights themselves have said about their plays and productions, Kayser delineates these challenges and argues that playwrights draw on various conscious strategies in response. These strategies, evident in the work of such playwrights as Pearl Cleage, Sandra Deer, Lillian Hellman, Beth Henley, Marsha Norman, and Shay Youngblood, provide them with the opportunity to lead audiences to reconsider monolithic understandings of northern and southern regions and, ultimately, create new visions of the South.
Casey Kayser is assistant professor of English and director of the Medical Humanities Program at University of Arkansas. She is coeditor of Carson McCullers in the Twenty-First Century and Understanding the Short Fiction of Carson McCullers. Her work has appeared in the Journal of Medical Humanities, Pedagogy, Mississippi Quarterly, and Midwestern Folklore.