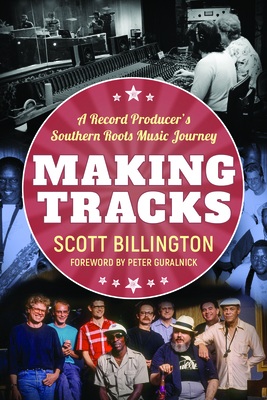 
Backordered
From the 1980s through the early 2000s, a golden era for southern roots music, producer and three-time Grammy winner Scott Billington recorded many of the period's most iconic artists. Working primarily in Louisiana for Boston-based Rounder Records, Billington produced such giants as Irma Thomas, Charlie Rich, Buckwheat Zydeco, Johnny Adams, Bobby Rush, Ruth Brown, Beau Jocque, and Solomon Burke. The loving and sometimes irreverent profiles in Making Tracks reveal the triumphs and frustrations of the recording process, and that obsessive quest to capture a transcendent performance. Billington's long working relationships with the artists give him perspective to present them in their complexity--foibles, failures, and fabled feats--while providing a vivid look at the environs in which their music thrived. He tells about Boozoo Chavis's early days as a musician, jockey, and bartender at his mother's quarter horse track, and Ruth Brown's reign as the most popular star in rhythm and blues, when the challenge of traveling on the "chitlin' circuit" proved the antithesis of the glamour she exuded on stage. In addition, Making Tracks provides a widely accessible study in the craft of recording. Details about the technology and psychology behind the sessions abound. Billington demonstrates varying ways of achieving the mutual goal of a great record. He also introduces the supporting cast of songwriters, musicians, and engineers crucial to the magic in each recording session. Making Tracks sings unforgettably like a "from the vault" discovery.
Scott Billington is a three-time Grammy-winning roots music producer who has worked with such artists as Irma Thomas, Charlie Rich, and Bobby Rush. For many decades, he balanced his roles of producer, art director, musician, and A&R executive at the highly regarded Rounder Records label, where he was responsible for hundreds of recordings. A former Recording Academy Trustee, he lives in New Orleans, where he teaches music production at Loyola University. He often performs with his wife, the children's musician Johnette Downing.