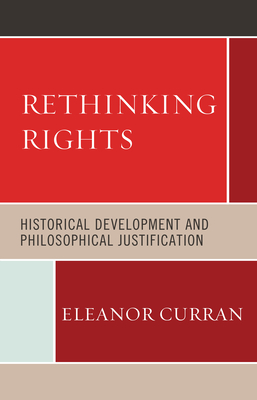 
Not On Our Shelves—Ships in 1-5 Days
(This book cannot be returned.)
Rethinking Rights: Historical Development and Philosophical Justification takes a new look at the history of individual rights, focussing on the way that philosophers have written that history. The scholastics and early modern writers used the notion of natural rights to debate the big moral and political questions of the day, such as the treatment of Indigenous Americans under Spanish rule. John Locke put natural rights at the centre of liberal political thought. But as the idea grew in strength and influence, empiricist and positivist philosophers punctured it with attacks of logical incompetence and illegitimate appeals to theology and metaphysics. Philosophers then turned to law and jurisprudence for the philosophical analysis of rights, where it has largely stayed ever since. Eleanor Curran argues that the dominance of the Hohfeldian analysis of (legal) rights has restricted our understanding of moral and political rights and led to distorted readings of historical writers on rights. It has also led to the separation of right from the important related notion of liberty-freedoms are now seen as inferior to claims. Curran looks at recent philosophy of human rights and suggests a way forward for justifying universal moral and political rights and separating them from legal rights.
Eleanor Curran is honorary senior lecturer in the Philosophy Department and Law School at the University of Kent.