Zero to Sixty Million: Under the Hood of the World's Largest eBay Motors Dealer (Paperback) 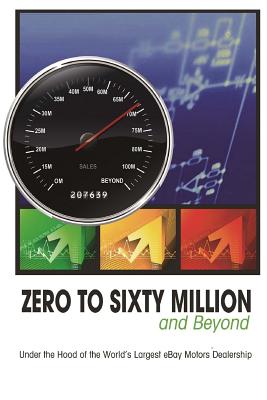 Zero to Sixty Million: Under the Hood of the World's Largest eBay Motors Dealer (Paperback)


Not On Our Shelves—Ships in 1-5 Days
(This book cannot be returned.)
With annual sales exceeding the $600 Million Mark, Texas Direct Auto is the largest independent dealership in the nation and is the largest eBay Motors Dealership in the world. This book was written when the authors hit $60 Million in annual sales. Their continued success into the beyond proves that many of the techniques they cover in their book not only worked for them when they started this venture, but that they continue to work as they scale their enterprise. So how do you go from selling zero cars a month to over 400 cars a month is only 4 years? (As of 2014 they sell an average of 2500 units a month.) How do you buy that many vehicles, how do you manage your customers, how do you turn inventory more than once a month, how do you manage the 1000's of things that need to be done at any given second in time while keeping overhead as low as possible? How to do you stay organized, and how do you put the pedal to the metal and accelerate while doing all these things? These are the types of questions that the authors aim to answer in their Book Zero to Sixty Million. More than just a story, this book takes the reader for a ride in the Texas Direct Auto Machine and then lets them take a rare look under the hood of the world's largest independent car dealer. * If you are interested in starting your own business or are already in business for yourself, this book is for you. * If you are thinking of buying a car in the near future, this book is for you. * If you are a employee looking to get ahead at your place of work, this book is for you. * If you like to read about people and places and how they do the things they do, this book is for you.
This book with co-authored by Mike Welch and Rick Williams. Mike and Rick have been friends for over two decades and have done business together for the last 10 years. They met in a high school Economics class in the late 1980s. They went on to attend the same college, were in each other's weddings, and worked together on various projects before venturing out in 1997 to help found a successful software company that grew from a start-up to over 65 employees in less than 4 years. They later went on to found Texas Direct Auto, the company on which this book was based. They both play an active role in its current success and continue to put the pedal to the metal, making improvements, removing waste and keeping the company on track to hit the targets of the beyond.