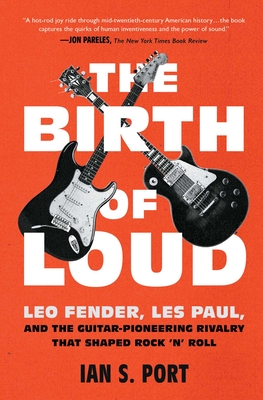 
On Our Shelves Now at:
“A hot-rod joy ride through mid-20th-century American history” (The New York Times Book Review), this one-of-a-kind narrative masterfully recreates the rivalry between the two men who innovated the electric guitar’s amplified sound—Leo Fender and Les Paul—and their intense competition to convince rock stars like the Beatles, Jimi Hendrix, and Eric Clapton to play the instruments they built.

In the years after World War II, music was evolving from big-band jazz into rock ’n’ roll—and these louder styles demanded revolutionary instruments. When Leo Fender’s tiny firm marketed the first solid-body electric guitar, the Esquire, musicians immediately saw its appeal. Not to be out-maneuvered, Gibson, the largest guitar manufacturer, raced to build a competitive product. The company designed an “axe” that would make Fender’s Esquire look cheap and convinced Les Paul—whose endorsement Leo Fender had sought—to put his name on it. Thus was born the guitar world’s most heated rivalry: Gibson versus Fender, Les versus Leo.

While Fender was a quiet, half-blind, self-taught radio repairman, Paul was a brilliant but headstrong pop star and guitarist who spent years toying with new musical technologies. Their contest turned into an arms race as the most inventive musicians of the 1950s and 1960s—including bluesman Muddy Waters, rocker Buddy Holly, the Beatles, Bob Dylan, and Eric Clapton—adopted one maker’s guitar or another. By 1969 it was clear that these new electric instruments had launched music into a radical new age, empowering artists with a vibrancy and volume never before attainable.

In “an excellent dual portrait” (The Wall Street Journal), Ian S. Port tells the full story in The Birth of Loud, offering “spot-on human characterizations, and erotic paeans to the bodies of guitars” (The Atlantic). “The story of these instruments is the story of America in the postwar era: loud, cocky, brash, aggressively new” (The Washington Post).
Ian S. Port is an award-winning writer and music critic whose work has appeared in Rolling Stone, Village Voice, The Threepenny Review, and The Believer, among others. He is also the former music editor of the San Francisco Weekly. A lifelong guitar player and California native, he and his wife now live in New York City. The Birth of Loud is his first book.
New York Times Book Review Editors' Choice

“In The Birth of Loud, Ian S. Port has sorted out the facts of the electric guitar’s much-mythologized genesis and cultural conquest. He turns them into a hot-rod joy ride through mid-20th-century American history. With appropriately flashy prose, he dismantles some misconceptions and credits some nearly forgotten but key figures. He also summons, exuberantly and perceptively, the look, sound, and sometimes smell of pivotal scenes and songs. The Birth of Loud rightfully celebrates an earlier time, when wood, steel, copper wire, microphones and loudspeakers could redefine reality. Tracing material choices that echoed through generations, the book captures the quirks of human inventiveness and the power of sound.”
—Jon Pareles, New York Times Book Review

“Fascinating . . . one of Port’s true strengths [is] his ability to marry an agreeably anecdotal writing style to a musician’s ear. The way a Telecaster snaps and sizzles, the way a Les Paul purrs with liquid, violin-like tones; he just gets it. . . The story of these instruments is the story of America in the postwar era: loud, cocky, brash, aggressively new.”
—Washington Post

“[An] excellent dual portrait . . . In the second half of the book, Mr. Port, a veteran music journalist, touches on the work of every major guitar player of rock’s golden age, from Muddy Waters to Buddy Holly—whose appearance on “The Ed Sullivan Show” electrified (the pun is unavoidable) Eric Clapton and Paul McCartney and John Lennon—and continuing through Jimi Hendrix, Jimmy Page and, of course, Bob Dylan, whose notorious switch from acoustic to electric at the 1965 Newport Folk Festival scandalized his fans. Not everyone played a Fender or a Les Paul—the Beatles were Rickenbacker fans, and Gretsch guitars had a significant market share—but, as Mr. Port says, the wildfire popularity of those two guitars fueled a world-changing demand for electric guitars of every type.”
—Wall Street Journal

“Ian S. Port’s The Birth of Loud reframes the standard history of rock ’n’ roll around the dual creators of the modern electric guitar. . . . Instead of a parade of frontmen and songwriters dueling it out in the charts, Port presents a ground-up account of an at-times begrudging friendship between two Angelenos who created the sound of what we instinctively understand as ‘rock.’ . . . Port’s research is thorough and his prose is lucid. If the evanescence of the internet and the machine-like qualities of synthpop make you want to put words to that vague cultural hunger for something more tactile, more connected to physical reality, this is your book. . . . The Birth of Loud is a compelling addition to the misremembered history of the time.”
—SF Weekly

“[Tells] the story of the development of the electric guitar through the lives of its two most famous names….Port deftly toggles between their parallel paths, as if swiveling from one effects pedal to another.”
—James Sullivan, San Francisco Chronicle

“Ian S. Port knows a thing or two about guitar heroes. . . . [With] lyrical, evocative prose, The Birth of Loud includes vivid scenes of Muddy Waters inventing Chicago blues, the Rolling Stones' sex-drenched appearance on The T.A.M.I. Show, Buddy Holly's TV debut with Ed Sullivan, Bob Dylan going electric at Newport and more. Along the way, Fender and Paul hone their inventions to perfection, vie for endorsements from the hottest players, and engage in that age-old driver of American innovation: cutthroat competition.”
—KQED “Arts”

“A rip-roaring journey through the early days of rock 'n' roll, told through the lives of the men whose innovative guitars helped usher it into existence . . . A lively, difficult-to-put-down portrait of an important era of American art that enhances readers' appreciation for the music it depicts.”
—Kirkus Reviews (Starred Review)

“A page-turning look at two central players [Leo Fender and Les Paul] in the sonic evolution of popular music. Port explores their trials and tribulations with an expert hand. This is a long-overdue cultural biography of music innovation. VERDICT: Thoroughly entertaining and deeply informative, this love letter to American creativity and rock and roll belongs in every library and should be read by all rock fans.”
—Library Journal (Starred Review)

“This smartly written and genuinely exciting book walks us through the bitter rivalry between Fender and Gibson and, since there is no way to tell this story without telling the story of rock ’n’ roll itself, also provides a jaunty if necessarily abbreviated history of rock. For music buffs, this one is special."
—Booklist

“[The] definitive history of the electric guitar and its two foundational personalities [Leo Fender and Les Paul]. Theirs is a fascinating and compelling story, especially in the hands of a writer as committed to lively narrative . . . Port can spin out evocative, succinct rock ’n’ roll writing with the best of them.”
—The New York Journal of Books

“Lushly descriptive and detailed…[the book] is richly illustrative in bringing these rock giants and the tools of their trade to life in a squall of beautiful feedback.”
—Publishers Weekly

“More than an essential, colorful, and gripping history of the electric guitar, The Birth of Loud introduces Ian Port, the best new non-fiction writer of the past twenty years.”
—Daniel J. Levitin, author of This Is Your Brain on Music

“Ian Port’s found a way to tell the story of the birth of rock ‘n’ roll—for some of us, among the postwar American stories, those that help define who we feel ourselves to be—in beautifully-evoked dual portraits of the men who made the instruments. In doing so, he re-situates this story in its context so neatly it is as if it had never been told before at all.”
—Jonathan Lethem, author of Motherless Brooklyn and The Fortress of Solitude

"Ian Port has created a perfect blend of popular history, social commentary, and enough guitar details to satisfy the most rabid six-string geek. This is a fascinating book."
—Jonathan Kellerman, bestselling novelist and author of With Strings Attached: The Art and Beauty of Vintage Guitars

"Guitar players are partly born, partly made, and every one has a story. So, too, are guitars, including the electric guitars that changed the world more than half a century ago. This is their story, and the story of their makers, well-told."
—Gary Marcus, author of Guitar Zero

“Long before Les Paul and Leo Fender were brand names who revolutionized music and changed culture, they were two guys—obsessively tinkering to recreate sounds in their heads. In The Birth of Loud Ian S. Port vividly captures the compulsion and competition that drove these fascinating oddballs to rock the world.”
—Alan Light, former editor-in-chief of Vibe and Spin and author of The Holy or the Broken: Leonard Cohen, Jeff Buckley and the Unlikely Ascent of “Hallelujah”

“It’s hard for me to think of an invention more crucial to my interior life than the electric guitar, so in a way The Birth of Loud, Ian Port’s moving, riveting account of the instrument’s development and rise to ubiquity, feels like a sacred text—the story of how I came to be. It’s also a rich and fascinating tale of obsession, ingenuity, and American abandon. Thank heavens for Les Paul, thank heavens for Leo Fender, and thank heavens for Ian Port.”
—Amanda Petrusich, author Do Not Sell at Any Price: The Wild, Obsessive Hunt for the World's Rarest 78rpm Records

“The Birth of Loud is more than history, journalism or criticism—it’s a killer rock ’n’ roll story, complete with money, egos, star power and, yes, electric guitars.”
—Steve Knopper, author of MJ: The Genius of Michael Jackson and Appetite for Self-Destruction: The Spectacular Crash of the Record Industry in the Digital Age

“The Birth of Loud channels trickles of intriguing new information into a confluence of big ideas about the history of the electric guitar. This book is essential reading for guitar history maniacs!”
—Deke Dickerson, guitar historian, bandleader, and author of The Strat in the Attic