Way of the Wolf: Straight Line Selling: Master the Art of Persuasion, Influence, and Success (Paperback) 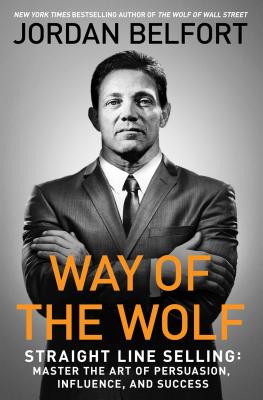 Way of the Wolf: Straight Line Selling: Master the Art of Persuasion, Influence, and Success (Paperback)


Not On Our Shelves—Ships in 1-5 Days
Jordan Belfort—immortalized by Leonardo DiCaprio in the hit movie The Wolf of Wall Street—reveals the step-by-step sales and persuasion system proven to turn anyone into a sales-closing, money-earning rock star.

For the first time ever, Jordan Belfort opens his playbook and gives you access to his exclusive step-by-step system—the same system he used to create massive wealth for himself, his clients, and his sales teams. Until now this revolutionary program was only available through Jordan’s $1,997 online training. Now, in Way of the Wolf, Belfort is ready to unleash the power of persuasion to a whole new generation, revealing how anyone can bounce back from devastating setbacks, master the art of persuasion, and build wealth. Every technique, every strategy, and every tip has been tested and proven to work in real-life situations.

Written in his own inimitable voice, Way of the Wolf cracks the code on how to persuade anyone to do anything, and coaches readers—regardless of age, education, or skill level—to be a master sales person, negotiator, closer, entrepreneur, or speaker.
Jordan Belfort has acted as a consultant to more than fifty public companies and has been written about in virtually every major newspaper and magazine in the world, including The New York Times, The Wall Street Journal, Los Angeles Times, The Times (London), Forbes, and Rolling Stone. He is the author of the two international bestselling memoirs, The Wolf of Wall Street and Catching the Wolf of Wall Street, which have been published in over forty countries and translated into eighteen languages.