Dancing to the Drum Machine: How Electronic Percussion Conquered the World (Paperback) 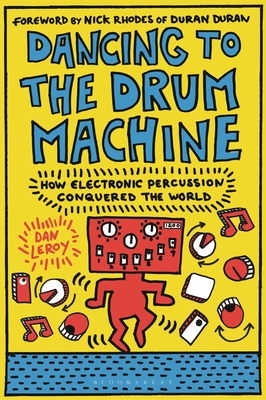 Dancing to the Drum Machine: How Electronic Percussion Conquered the World (Paperback)

Dancing to the Drum Machine is a never-before-attempted history of what is perhaps the most controversial musical instrument ever invented: the drum machine. Here, author Dan LeRoy reveals the untold story of how their mechanical pulse became the new heartbeat of popular music. The pristine snap of the LinnDrum. The bottom-heavy beats of the Roland 808. The groundbreaking samples of the E-MUSP-1200. All these machines-and their weirder, wilder-sounding cousins-changed composition, recording, and performance habits forever. Their distinctive sounds and styles helped create new genres of music, like hip hop and EDM. But they altered every musical style, from mainstream pop to heavy metal to jazz.

Dan LeRoy traces the drum machine from its low-tech beginnings in the Fifties and Sixties to its evolution in the Seventies and its ubiquity in the Eighties, when seemingly overnight, it infiltrated every genre of music. Drum machines put some drummers out of work, while keeping others on their toes. They anticipated virtually every musical trend of the last five decades: sequencing, looping, sampling, and all forms of digital music creation. But the personalities beneath those perfect beats make the story of drum machines a surprisingly human one-told here for the very first time.
Dan LeRoy is the Director of Writing and Publishing at Lincoln Park Performing Arts Charter School, USA. His writing has appeared in The New York Times, Rolling Stone, Newsweek, The Village Voice, Esquireonline, and Alternative Press. He is the author of The Beastie Boys' Paul's Boutique (Bloomsbury 2006), The Greatest Music Never Sold (2007), For Whom the Cowbell Tolls (2014), and Liberty's Lions: The Catholic Revolutionaries Who Established America (2021).