Love, Activism, and the Respectable Life of Alice Dunbar-Nelson (Paperback) 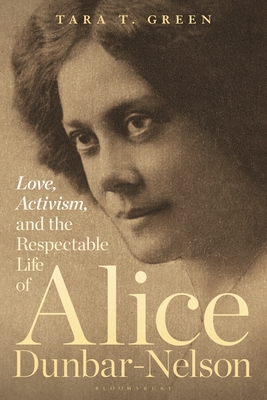 Love, Activism, and the Respectable Life of Alice Dunbar-Nelson (Paperback)

"A fascinating biography of a fascinating woman." - Booklist, starred review
"This definitive look at a remarkable figure delivers the goods." - Publishers Weekly, starred review
A brilliant analysis. - Jericho Brown, Pulitzer Prize winner
Featured in Ms. Magazine's "Reads for the rest of us" list of books by or about historically excluded groups

Born in New Orleans in 1875 to a mother who was formerly enslaved and a father of questionable identity, Alice Dunbar-Nelson was a pioneering activist, writer, suffragist, and educator. Until now, Dunbar-Nelson has largely been viewed only in relation to her abusive ex-husband, the poet Paul Laurence Dunbar. This is the first book-length look at this major figure in Black women's history, covering her life from the post-reconstruction era through the Harlem Renaissance. Tara T. Green builds on Black feminist, sexuality, historical and cultural studies to create a literary biography that examines Dunbar-Nelson's life and legacy as a respectable activist - a woman who navigated complex challenges associated with resisting racism and sexism, and who defined her sexual identity and sexual agency within the confines of respectability politics. It's a book about the past, but it's also a book about the present that nods to the future.
Tara T. Green is Professor of African American and African Diaspora Studies at the University of North Carolina at Greensboro, USA where she teaches literature and Black women's studies courses. She is the author of Reimagining the Middle Passage: Black Resistance in Literature, Television, and Song (2018), A Fatherless Child: Autobiographical Perspectives of African American Men (2009), and See Me Naked: Black Women Defining Pleasure during the Interwar Era (2022), and she is the editor of two books, including From the Plantation to the Prison: African American Confinement Literature (2008). She is from the New Orleans area.