Atomic Bill: A Journalist's Dangerous Ambition in the Shadow of the Bomb (Hardcover) 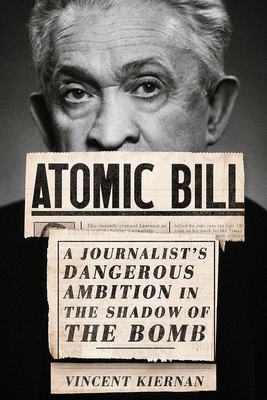 Atomic Bill: A Journalist's Dangerous Ambition in the Shadow of the Bomb (Hardcover)

In Atomic Bill, Vincent Kiernan examines the fraught career of New York Times science journalist, William L. Laurence and shows his professional and personal lives to be a cautionary tale of dangerous proximity to power. Laurence was fascinated with atomic science and its militarization. When the Manhattan Project drew near to perfecting the atomic bomb, he was recruited to write much of the government's press materials that were distributed on the day that Hiroshima was obliterated. That instantly crowned Laurence as one of the leading journalistic experts on the atomic bomb. As the Cold War dawned, some assessed Laurence as a propagandist defending the militarization of atomic energy. For others, he was a skilled science communicator who provided the public with a deep understanding of the atomic bomb. Laurence leveraged his perch at the Times to engage in paid speechmaking, book writing, filmmaking, and radio broadcasting. His work for the Times declined in quality even as his relationships with people in power grew closer and more lucrative. Atomic Bill reveals extraordinary ethical lapses by Laurence such as a cheating scandal at Harvard University and plagiarizing from press releases about atomic bomb tests in the Pacific. In 1963 a conflict of interest related to the 1964 World's Fair in New York City led to his forced retirement from the Times. Kiernan shows Laurence to have set the trend, common among today's journalists of science and technology, to prioritize gee-whiz coverage of discoveries. That approach, in which Laurence served the interests of governmental official and scientists, recommends a full revision of our understanding of the dawn of the atomic era.

Vincent Kiernan is the Dean of the Metropolitan School of Professional Studies at the Catholic University of America in Washington DC. He is the author of several books, including Embargoed Science.